I don't always drink Tequila, but when I do, I drink Cabo Wabo 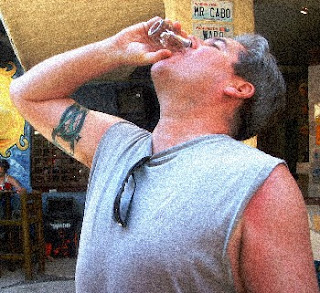 I just got back from a week in Cabo with my family. This sort of explains why I haven't been blogging religiously. Not that I have every been religiously blogging. I'm more or less an agnostic. I do pray if there is a god (or gods) he or she or they will forgive me.

This was probably my 6th trip to Cabo. Four of those were via cruise ship so they consisted of riding a boat to the pier at 8 a.m., grabbing a cab to downtown Cabo San Lucas, dodging souvenir sales people and time share sharks and stopping at Sammy Hagar's Cabo Wabo bar and downing a shot or two of Cabo Wabo tequila and buying a t-shirt before dashing back to the pier to catch a boat back to the cruise ship.

It wasn't exactly the way to get the true flavor of Baja, but it was best you could do on a three hour shore excursion. Plus you had to get back to the ship in time for the buffet. Life must have priorities.

The last two trips to Cabo we have stayed at all-inclusive resorts closer to San Jose Del Cabo, but we have kept up the tradition of going into Cabo San Lucas and we still stop at Cabo Wabo for my traditional shot of Cabo Wabo tequila with a bottle of Corona. I am not certain how much longer I can carry on this tradition. My young children won't buy the "daddy is taking medicine" line much longer when I'm conducting the "salt, shot, lime" ritual. 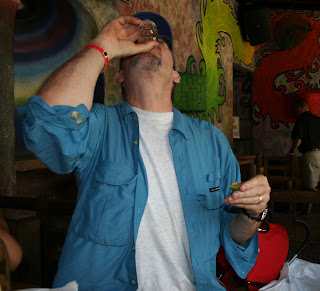 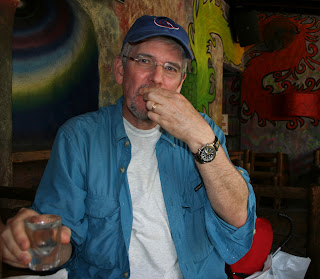 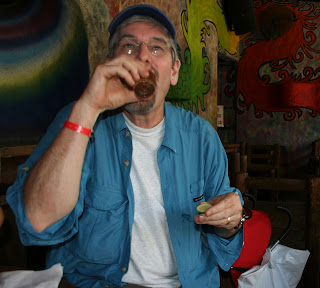 The Cabo Wabo ritual is changing in other ways. I have stopped buying Cabo Wabo t-shirts because they are pretty pricey and never seem to change. And if the truth were to be told, I never did like Sammy Hagar's music. I realize "I Can't Drive 55" is a classic, but it isn't really that great of a song.

But as tequilas go, Cabo Wabo is pretty smooth. When taken for medicinal purposes of course.
Posted by Time at 6:58 PM 1 comment:

I am not sure why they call love songs, love songs. Most of them aren't really about love. They are about someone being in love (or lust) with someone who doesn't love them. So by all rights, they should be called stalker songs, loser songs or simply country songs. But I suppose they lose that romantic marketability if you tried to call them what they are -- whiny crap.

But a rose is a rose.

Not that I didn't spend a good portion of my youth moping around listening to "love" songs. The 70s and 80s were full of really bad ones. There's nothing like raging hormones to make a teen aged boy susceptible to lyrics like, "You left in the rain without closing the door, I didn't stand in your way" or "Every now and then I get a little bit lonely and you're never coming around."

Of course, I also liked the lyrics from one of Harry Nilsson's songs that went something like, "You're breaking my heart, you're tearing it apart, so fuck you."

I still tear up at that one.

Barbara Streisand's song Evergreen was big when I was in my teens, too. It was from the movie A Star is Born starring who else, Barbara Streisand and Kris Kristofferson (singer/song writer who wrote Bobbie McGee that Janis Joplin made famous). If you aren't familiar with A Star is Born, it is about a drugged out rock star at the end of his career (Kristofferson) who meets an up and coming talent (Streisand), falls in love and gets her career on track. To make it a perfect love story, he kills himself in a car accident so he doesn't drag her career down.

I tear up on that one, too.

Let's no forget My Heart Will Go On from the movie, Titanic. It gets you all lovey, weepy about a one night stand between a young couple who meet on the Titanic (hooking up wiht someone on a cruise is never a good idea). Rose and Jack end up floating in the icy waters of the Atlantic after the ship sinks. Rose is floating on a piece of debris and Jack is in the water holding on to her hand telling her never to let go. He freezes to death and Rose romantically breaks off his frozen fingers from her hand and lets him sink to the bottom of the ocean and as the song says, Rose's heart goes on.