Day of the dread 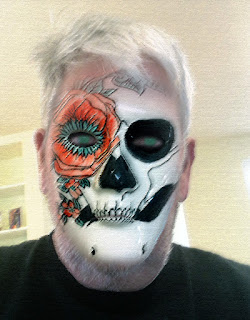 The Day of the Dead is a traditional Mexican holiday to honor the dead. It is a time of remembrance, because the memory symbolically keeps the dead person alive.
Keeping our memory alive after we die seems to be a pretty common thread throughout human history. Kings build pyramids to be remembered. There are statues, portraits, tombstones, photos, memoires, and, of course, blogs. These are all attempts to keep memories alive after a person dies. But for the most part, I think they fail. Shoot, how many times have I railed on how I am invisible and forgotten while alive. I can only imagine what it will be like when I'm dead.
I think we dread death because we can't imagine becoming nothing. I think of the hundreds if not thousands of people I've met in my life through school or work. And as much as I enjoy their company when they are around, once they move on, they are gone. Very few stay in touch. Some even die and you have a twinge of sadness, but then everything moves on.
But where is is moving on to? Last night I watched a movie on Showtime called After.Life. It stars Liam Neeson as a mortician who may or may not have the ability to communicate with the newly dead people he is preparing for viewings at funerals. One of those is Christina Ricci who may or may not be dead. The movie is pretty good at keeping you guessing until the end (no pun intended). But although the movie dealt with helping people to move on, it also did give any idea where you would move on to.
Of course, the reason is that the only way you can know where you move on to is by moving on to it. And despite what Tik Tok would like you to believe, once you have moved on, there isn't a social media channel for the dead to share posts with the living. If there was Zuckerberg would have exploited it by now and it would be called something like Dead Line or After Thoughts. There would also be controversies over all of the marketing information that was being harvested from the platform and companies would be figuring out ways to sell stuff to dead people.
Like every other social media platforms the one for the dead would also be rife with live people pretending to be dead and dead people pretending to be live. So basically you still couldn't trust anything that was posted.
But there is no such social media platform and we don't really have anyway to know what happens after we die. Well, except for Ouija boards, and they open up a whole new can of worms.
Posted by Time at 4:45 PM No comments: