Tears of a clown 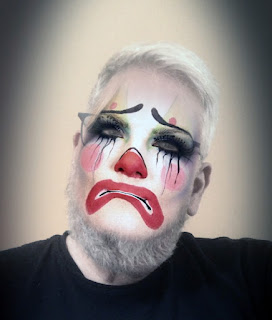 You are probably sensing that I spend way too much time playing with the filters on Snapchat. But for me, it is a logical progression from the years I've spent Photoshopping my face on various animate and inanimate objects. It is also less labor intensive.
You (and I am as usual addressing the generic you - the now and future reader of my blog) may also think that I am enamored with my own face since I use it in so many of my posts. There are many reasons I generally use my own image. One, just as Van Gogh and many artists throughout history created self-portraits because they could always rely on their availability as a model, I use my own image because I'm always available. I avoid Photoshopping my family's faces on things for my blog to protect their privacy. Though I do Photoshop their faces on greeting cards (much to my children's chagrin).
In all honesty, I don't like my face. I cringe at photos of myself. I cringe when I look in a mirror. Photoshop and Snapchat filters allow me to fix some of my facial flaws. It's kind of like putting on a costume for Halloween so you can see what it feels like not to be you for awhile. And it has the advantage of not having to spend hours applying and removing makeup.
Despite my morbid fear of clowns, mimes and those people who hand out food samples at Costco, I kind of like the way I look as a twisted, crying clown even though it does remind me a bit of Tammy Fay Baker (who was married to a clown). The image above reminds me of those black velvet clown paintings from the 60s.
Ironically, the only thing I use Snapchat for is the filters. I have never sent anyone a Snapchat. I don't have a clue as to how it works or why you would send someone a Snapchat instead of a text. I vaguely know that the messages you send on Snapchat disappear after short time so I image it has something to do with sending naked photos of yourself to someone.
I guarantee you that if I ever used it for that purpose the recipient would definitely want it to go away quickly.
Sad clown.
Posted by Time at 2:25 PM No comments: 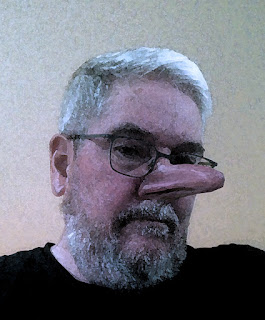 I'll be upfront with you. I can't seriously tell you that I am an authority on anything. This is problematic as a blogger, because most people look to bloggers to be authorities on something like food, fashion or pest control. I am nothing more than an observer who has spent more than six decades staring in morbid fascination at life. And I suppose I've learned a lesson or two, but I can't say I've mastered anything.

For some reason, people like it when someone states something with great authority, like the earth is flat or there is only one god. It takes a lot of the ambiguity out of things. You don't have to question or think about it. So like a sheep, you can follow blindly and hope the path you are on leads you to the truth or in a sheep's case, food.

But when I studied journalism years ago, we were taught that all "facts" had to be verified by trusted sources. And the more trusted sources you had, the better the chances were that your story was true. Problem is that I don't think there is such a thing as a trusted source. Every institution invents truths to justify their existence and behavior. Let's face it, governments lie, churches lie, celebrities lie and corporations lie. I've spent enough time in marketing to know that something doesn't necessarily have to be true to sell a product or concept. People just have to believe it is true.

So you are really better off taking the position that nothing is true. But trusting nothing does create a very lonely existence. This is why religions turn to faith as the justification for their lies. If you have faith in something, it doesn't have to be true. Even science bases it's truths on failed experiments and elimination of things that don't work. What is left should be the truth, right?

So in conclusion (because I believe every train of though should have a caboose), don't believe anything you read, watch, hear, smell or feel.

Trust me on this. 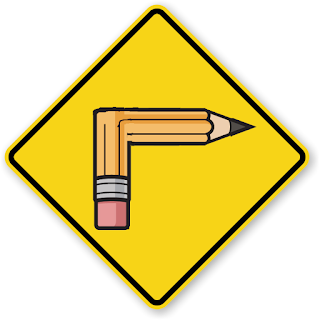 Writing, per se, has never been hard for me. After years of journalism and copywriting, I don't really struggle to write a sentence or paragraph. Occasionally I am quite prolific. And occasionally I don't have anything to say. But occasionally I say it anyway. Lately I've just been sifting through old blog posts that I think were pretty good and reposting them on Medium in hopes someone else will think they are pretty good, too. But as I have noted before, most people are on Medium to be read, not to read.

I tried this same approach when I started my blog many years ago. I posted several unpublished short stories I'd written many, many years ago and posted them on my blog.  In 17 years they have only been viewed by a few hundred people. Not a very impressive statistic considering your average Tik Tok post gets several hundred views often in less than a few hours.

The Internet is both a boon and a curse to writing. It provides you an inexpensive way to expose your writing to the world but it also buries the world in a sea of content that also makes it near impossible to be heard or read. And even if you are read, the reader moves on within seconds and rarely returns.

I think writing started to die when we started to refer to it as content. Now it is just another so much garbage used to fill the infinite space in the cloud. A writer is viewed, swiped and forgotten in milliseconds.

I wonder how the classically great writers would have fared in the age of the Internet? I wonder if Hemmingway would have reached for his shotgun (or bottle of rum) earlier in his life if he had to post his writing in a blog rather through a publisher?

Not that I ever really liked Hemmingway's writing even though I've grown to look like him in my old age.

Moliere said, "Writing is like prostitution. First you do it for love, and then for a few close friends, and then for money." If he was alive today he would have discovered you can't even give it away.