A little off color 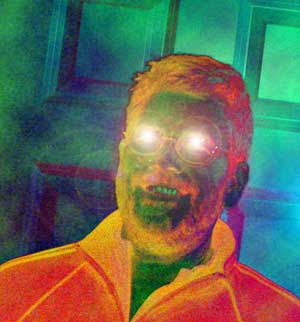 I swear, by the moon and the stars in the sky
I'll be there
I swear, like a shadow that's by your side
I'll be there
For better or worse, 'til death do us part
I'll love you with every beat of my heart
I swear
Words and Music by Gary Baker and Frank Myers

Words. We empower them with the stigma of the forbidden and spew them. Then they become profanity. But they are still words.

My father learned to swear in the navy during World War II. He'd interject "damn" or "hell" into most of his sentences. It lost all meaning. But still my mother "tsked, tsked" her way through my childhood at his swearing. She rarely swore. Though on a rare occasion she squeezed out a "damnation." It would set me off dancing around her chanting, "Damnation, damnation, damnation, damn, damn, damn." This would set her off giggling and she would forget her transgression.

I began swearing in junior high when I started playing basketball. I couldn't play worth shit, but I could swear a blue streak by the end of the season. On more than one occasion I would have got a technical foul from the ref if he could have figured out where the swearing was coming from. But I was pretty good at spewing my string of swear words discretely while at the bottom of a pile of players fighting for a loose basketball.

Most of my swearing these days is confined to the car. I can't seem to drive with spouting streams of unbelievably foul language aimed at the uncertain parentage of other drivers. I have created strings of swear words that are works of profane art. And I drive along chanting them like a mantra intended to keep the driving gods on my side. I also use lots of non-verbal hand signals.

Despite my advance swearing skills, for some reason I find it difficult to write dirty words. Oh, I can slap out a "shit" or "hell," but I freeze if I try to type "fu...fu...fuc..." Well, you get the picture. When I try to swear in my blog I hear my mom "tsk, tsking" me and my fingers freeze. Pretty fucked up, huh?

I swear like a sailor when I'm on my own or with someone I feel EXTREMELY comfortable with, but I too find it hard to swear on "paper" so to speak.

The one word I cannot stand and one that will never pass my lips is the C-word. Anyone who knows whats good for em DOES NOT use that word in front of me (do they Steve?)

I can't swear at all not in person, not on paper. This makes writing a dirty email very difficult. There is a lot of very important blanks. I guess it's just not for me.

When iwas young i use to say the work Fuck so often....
but then I discovered how nice a good f*** could be.... so now it no longer has the same impact....come to think of it...neither does the word C**7

laughing at Steve - my language can be colorful, but the "F... You" challenge never made sense to me. I've often argued it with people who use it. Why wish this on some one you don't like? Why not say "May you never be F..d?"

The later sounds like a dire curse, while to wish it makes me think I should wave my hand in benign benediction and smile.

when cursing I may indeed wave my hand, but I rarely smile.

Eh...I have to admit I let the F bomb fly every now and then and it seems to drive through the air like a sword in battle. I am creative in my swearing, but I have a real distaste for people who use tmesis to get their point across. It just sounds like an unnatural morph to say something like "abso-fuckin'-lutely.

I recall a day in 8th grade when I pulled the vacuum cleaner out of the closet and dropped part of it on my foot and yelled, "Son of a biscuit." I got a slap across the mouth from my Mother and I yelped, "I didn't say the bad word, Mom!!!!" She replied, "It's too close for comfort."

Son of a bitch.

Angel, The C-word really freaks men out, too. There is nothing like saying "Commitment" to make them run for the hills. :)

Andy,
I think it is the semi-permance of the written word that holds us more accountable than the explative uttered when we spill hot coffee on our crotches driving. On the other hand, writing can be dirty without swearing :)

Steve,
It's okay for an Aussie to swear. No one understands a word you say anyway.

Hayden,
I like the image of a "benign benediction" and a smile all done with the middle finger raised in salute.

Miss Bliss, I had a junior high school teacher who used to say, "Sunken Ditch and Hot Spam." But as George Carlin said, "Shoot is only Shit with two O's."

My mother slapped me for saying "that sucks" a long time ago. Appearently she believed it refered to felatio. I didn't know that at the time and I'm not sure that it's accurate. In any case, now you can say that on primetime TV.

I'm taking every goddamn opportunity to motherfucking swear until my ass kickin' baby is born. Then it's "good bye shit mouth" and hello "Mr. Fucking Rogers."

R. You kiss your momma with that mouth? But it is good to get it out of your system now before you become a role model. Fucking A.

I was digging around in old census reports a few years back and ran across a man named Jacob Fuck. Seriously. He was living with his wife Anna Fuck and five or six little Fucks at the time of the enumeration.

You think you have problems. Geesh.

Kristy, that dude was definitely fucked.

I swear much more than I should - especially when I'm driving. To make matters worse, I swear in three different languages!