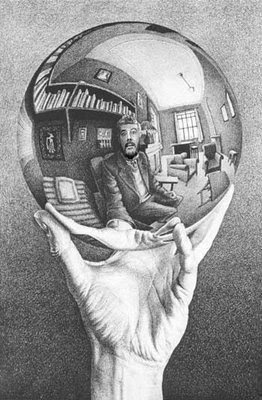 I don't know how others see me. I just know how I see me. So I am surprised at times when the worlds collide.

Living in a larger city such as Seattle, you tend to keep your guard up, especially when you are walking down the street in Pioneer Square (our historic downtown neighborhood that typically attracts the less affluent citizens of our city). I have always liked Pioneer Square with it's 19th century buildings and 'been around the block a few times' attitude.

A couple of days ago I went to lunch with a friend at a pizza by the slice place in Pioneer Square. We sat outside and ate our slices New York style, folded down the middle to contain the grease in the pizza. There was the usual crowds of tourists fresh from the Underground Tours clutching their maps of the area and looking vaguely desperate as they searched for something historic to photograph. They stuck out in sharp contrast to the street folk who heckled them from benches around Occidental Square.

My friend, who has been quitting smoking now for about three years said he needed some matches so we wandered over to a small store sandwiched between Dome Burger (named after the King Dome that was imploded about 7 years ago) and a bass guitar store. I waited outside while he went looking for fire sticks.

Rule number one in any big city is that you don't stop moving. Rule number two is that if you do stop moving, you don't let your guard down. If you violate both rules you quickly become visible and a magnet.

I violated both rules. I stopped and began daydreaming about god knows what and my street face slipped off. Within seconds I noticed someone approaching me out of the corner of my eye. I tried to slip my street face back on, but it was too late. I looked over and there was a semi-normal looking woman approaching my personal space zone. I say semi-normal because she wasn't pushing a shopping cart and she was dressed in normal street clothes, but I sensed she had fallen on hard times.

"Would you buy me some chips?"

It took me a few moments for this to register because I was expecting a pitch for spare change.

"Yes," she responded. "I need something in my stomach to absorb the alcohol." I looked up at the store and saw a row of potato chips.

"What kind of chips do you want?"

"Any kind," she said. I began heading towards the store to buy her some chips and she waited like a patient stray.

Then I heard her call out after me, "Cheddar cheese and sour cream."

I scanned the rows of chips and sure enough there were the cheddar cheese and sour cream variety. I grabbed a bag, paid for it and walked outside. The woman hadn't moved an inch. She lit up like a Christmas tree when she saw I hadn't scooted out the back door. I handed her the chips and a couple of bucks. She looked so happy and yet so sad, I did something I never do, I hugged her. Then I turned to join my friend who was on his second cigarette by then staring at me quizzically.

As I walked away the woman called after me, "God bless you. I'm going have a chip right now." She tore open the bag and held one of the chips and saluted me with it." I waved.

"What was that all about," my friend asked.

I thought about it for a minute and then answered, "Because she knew I would buy them for her."

My friend nodded and we walked back to work.
Posted by Time at 6:51 AM

That was vintage Tim. You can't hide kindness no matter how hard you try. Good for you Tim. I admire her honesty too. At least she didn't try and tell she needed money for her 13 kids or to catch a bus to the museum. She needed it to soak up the alcohol. I would have bought her the chips too. Ok....and I probably would have hugged her too.

Good for you Tim. Nice story. I'm surprised she just up and told you that she needed the chips to soak up the alcohol. Also interesting is the shop was not a guitar shop but a bass guitar shop. I didn't realize the market for bass guitars was so good as to allow a shop to specialize in them.

Isabella,
I do my best to hide kindness. I have a reputation to preserve. :)

Lights,
I actually found it touching that she would be upfront about why she wanted the chips. As for the bass guitar shop...Dude, this is Seattle! Nirvana! Soundgarten! We rock! I actually think there is a big market for bass guitars because other people made the same mistaken assumption I did when I took up bass: They are easier to play because there are only four strings and you don't have to know chords. Not true.

Why, Tim, sometimes you surprise me with how nice you are!

I think part of the reason you bought her the chips is because she was just plain honest with you. She wasn't trying to wrangle money with a lie and then use it for booze. She just needed food and told you why too. It's much easier to say yes to an honest request, isn't it?

lovely story. and now we have yet another peek behind the mask too!

Brilliant. "Because she knew I would buy them for her."
I think about her, ascertaining this truth, thinking "he's the one who won't turn away."
So much packed in to one small moment where worlds collide. ~JP

I loved this post so much I had to come back and read it again. Also, I forget to mention before that I loved the accompanying pic, very clever.

The world would be a better place if there were more people like you Tim.

I think most of us would have done the same thing. An honest request is so refreshing nowadays! It almost shocks one into honoring it!

The world would indeed be a much better place if people were more honest with what it is they need/want.

Kristy, Sometimes I suprise myself. And yes, I think honesty disarms and the natural inclination is to respond in kind.

Hayden, Pay no attention to the man behind the curtain. :)

JP, Thanks. That is a nice way of putting it. It was such a simple thing yet it seemed to mean so much more to both of us.

Isabella, There is nothing more flattering to a writer than having someone wanting to reread their work. Thank you

Blaznfyre,
I'd like to think we all would respond that way. I know I am so conditioned on most days to turn away from the hands reaching out to me. It breaks my heart at times that anyone is on the street in the richest country in the world.

Touched by an Angel!

My granddad used to feed everyone who asked "You never know which are angels Kitty" he'd say when I warned him about the 70's equivalent of "stranger danger". This was a nice story, Tim. Uplifting.

Kat,
I think your grand dad was right. And I'm glad you liked the story.

You hugged her? Seriously?

Anna,
Yep, I hugged her. It suprised even me.