Sticking to your guns 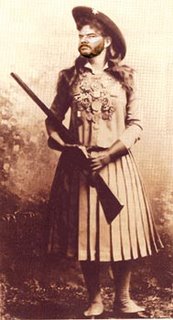 stick to one's gunsFig. to remain firm in one's convictions; to stand up for one's rights. (Fig. on a soldier remaining in place to fire a gun even when all appears to be lost.)

As I write this post, I am listening to a loop of The Civil Wars performing Barton Hollow

and Poison and Wine

. It is a byproduct of my OCD nature to obsessively listen to news songs I really like until I am sick to death of them. So far, I'm sticking to my guns that The Civil Wars are going big time.

That leads to my first digression. Since I make a living trying to pry people's hands off from those guns they stick to so stubbornly, I'll let you in on a little secret. There isn't much anyone can do to change some one's mind once they have they have it set on something. If you grew up having your father repeat over and over that there is no car like a Chevrolet and that Fords suck, chances are you will share that conviction and stubbornly stick to your guns. Unless...and here's where my job as a marketing person comes in...unless someone plays on the many psychological factors that make you hold onto the conviction that Chevy's are the only car to own.

I think the key is determining whether it really is your guns you are sticking to or someone else's guns. And I'm not trying to be Freudian here, either. Because I believe that a conviction isn't a conviction if it was drilled into you and you adhere to it by the sheer thread of rote indoctrination by an authority figure. The way to overcome pseudo convictions is to teach a person to cultivate independent thought and challenge the conventions of their fathers. If your father's conviction stands the test of your own filters of what is right or wrong than it can truly become your own conviction.

Then you can stick to your guns and no one can make you holster them.

That being said, if I am trying to target a group of people to have a conviction about a particular issue or product, I don't throw my troops charge of the light brigade style into a wall of people sticking to their guns on polarized sides of an issue. I take aim at those people staring blankly at their guns trying to figure out how to load them and which direction to point them.

On a personal note, I have to admire people who stick to their guns as long as they are sticking to guns for things I believe in that lean more towards the left than the right. If not, they can just stick their guns.