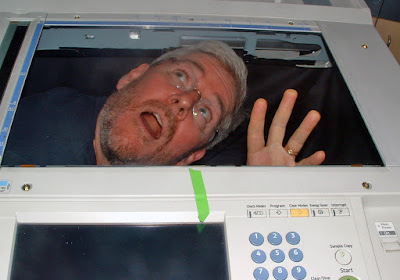 Just so you can't find the answer to everything by Googling it, I never could find a satisfactory explanation as to why someone who mimics someone is called a copycat. We have three cats and they don't seem to spend much time doing anything but eating, sleeping, crapping and puking. Though this being St. Patrick's Day, it opens up a debate over whether they are mimicking your average Irish wannabe.

I find it ironic someone came up with the phrase, "Imitation is the sincerest form of flattery" likely to justify plagiarising some one's original idea. Not that I think there is an original idea. Google has burst that self-delusional bubble. Google any original idea you may think you have and you'll find someone has beat you to it.

Or they may all be copycats.

It is hard to conceive of original thought in a society where much of learning it done through rote repetition. The key to educational success is often the ability to memorize versus an affinity for abstract thought. This becomes increasingly the case as the arts are eliminated from curriculum to make way for the basics of reading, writing and arithmetic.

Let's face it, if there were original thought, there would be no fashion, fads or trends. Things catch on because our herd mentality requires we go with the flow to avoid sticking out. Even the people who rebel against popular trends and fashions do so in sheep like flocks. Body piercings, tattoos and Mohawk haircuts are a perfect example.

Being a race of copycats probably has to do a great deal with survival. If you see your neighbor avoid being consumed by a saber tooth tiger by poking it with a sharp stick, you wouldn't go far by trying to be original and tickle it with a feather to avoid becoming lunch.

And I imagine most great inventions come about by building on someone else's great idea and just tweaking it a bit so that it works smoother. If this wasn't the case, we would still be watching black and white televisions.