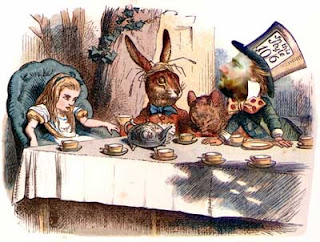 Someone posted "Why be normal?" as their Facebook status a few minutes ago and I had to fight the urge to  unleash a torrent of reasons why being normal isn't such a bad thing. For one, it goes a long way towards keeping you from being locked up.

Pronouncements like "why be normal," "march to the beat of a different drummer," "think outside of the box," and "draw outside of the lines" are trite, hackneyed phrases that scream of hypocrisy and make my eyes roll back into my head so far I'm afraid I'll need to learn to read Braille. People use these phrases to justify why they are weird and often outcasts.

Let's face it, everyone really wants to be liked and to be liked, you have to fit in. So if you have a strong desire to keep wild badgers as pets and walk around without pants (not something I'd recommend if you keep wild badgers as pets) you definitely won't appear normal and you likely won't fit in and have a lot of friends. Often times people who don't fit in overcompensate by making themselves even weirder. Then they seek out other weird people and band together to make fun of normal people and mutually embrace their weirdness. Case in point: Star Trek conventions.

I'm actually torn on this issue. On one hand, I have always felt I'm pretty non-mainstream. I don't like convention for convention's sake. But at the same time, I have no desire to stick out like a sore thumb. The solution seems to be to conform in public and rebel in private.

Kind of a cop out. But there is a certain survival aspect to this as well. When I was a kid growing up in Idaho, sticking out was a sure way to get the crap beat out of you by normal kids. And when was the last time you saw someone promoted in a company for thumbing their nose at the corporate dress code by wearing leather, sporting a Mohawk and etching a Swastika into their forehead.

Ridiculous example, I know. A non-conformist, creative type wouldn't want to be in a corporation unless they actually wanted to make enough money to survive. But at the same time, they would realize that it is useless to go into a conservative environment and demand that they conform to your non-conformist views.

Normal, after all, is a relative term (and I'm not referring to any of my relatives, because god knows none of them are normal). It may be normal to drink tea made out of rancid Yak butter in Tibet, but I wouldn't try and order it at a Starbucks in Seattle.  Though asking for a "double-tall, lowfat, no foam rancid Yak butter tea" does have a certain ring to it.

Unique and creative people don't need to scream out their uniqueness. I've railed before about the irony of art students all dressing in raggedy black cloths and piercing various body parts to make them unique in a sheeplike way.

So why be normal, you ask? Because the world is crazy enough without Bohemian wannabe's whining about being oppressed by a vanilla world.  Sometimes wrapping ourselves in a nice, normal routine is comforting.

Oh, but it is okay to color outside the lines once in a while.
Posted by Time at 1:37 PM

You said "Vanilla". I just can't get past it. I was going to say something but then I saw "vanilla" and now... I'm at a loss.

Oh yeah! Here it is.
"Normal" is okay. It means you don't need a straight jacket. "Average" and "conventional" are boring. Isn't it weird that the Star Trek Convention isn't really conventional at all?

I knew no one else but you would get the vanilla reference. :)

"Vanilla"...Oh, I knew you'd find a way to weave that term into something. What's in your closet, my friend...

Basically lots of shirts and pants. Oh, and some ties I rarely wear. :)