Going to the show 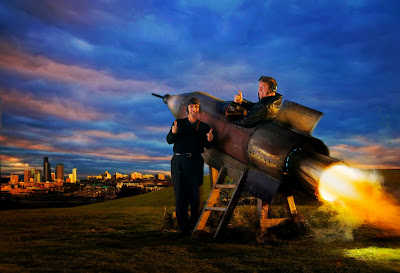 In baseball, going to the show means a player is brought up from the minor leagues to the majors. Its something I wouldn't have known unless I learned it from my friend Steve. He is the one standing next to the rocket above. I'm the one in the rocket. Steve died on May 6 after more than a year long battle with angiosarcoma, a rare form of cancer. He was two weeks younger than me.

Although Steve didn't play major league baseball, he was the ultimate baseball fan and a beloved coach of his son's little league teams. It seems only fitting that his memorial service was held in Safeco Field, the major league home of the Seattle Mariners.

I know very few people who have touched so many lives that their celebration of life could be held in a major league baseball field. I was in awe as I stepped into the field and watched multi-media slide shows depicting various stages in Steve's life. And I was touched as 9 people, including Steve's two high school and college aged sons, delivered eulogies.

Steve had broke the news about his disease to his friends via Facebook more than a year ago. Then he shared his battle with the disease via an online journal. It was a touching story filled with optimism and humor that anyone who knew Steve could recognize.  Steve's last journal entry came just days before his death. It was titled, "Cue the harpist." In it, Steve shared that the doctor's had given him between a week and a month to live. He then went on to tell everyone he was at peace and thank them all for being part of his life. I was blown away by the courage and grace of this wonderful person. I couldn't even imagine if the situation was reversed, having that much strength and selflessness.

I met Steve about 15 years ago when he took over as the account rep on my advertising account with the agency he worked for. Being almost exactly the same age, we immediately bonded over the popular culture we could relate to growing up. He shared my love for language and trivia. We spent many hours while taping radio spots or watching photo shoots, swapping stories and quizzing each other on random trivia.

About five years ago, my company switched ad agencies. But Steve stayed in touch, occasionally getting together with me for lunch. We'd take up where we left off, talking about family, life and health. It never occurred to me that any of these lunches would be the last time I'd see my friend. But it was.

The thing is, I wasn't Steve's best friend. But anytime I was talked to him, I felt like I mattered. And from what I gleaned from the outpouring of testimonies and eulogies after his death, many people felt like that about Steve.

As I sat in Safeco Field listening and watching Steve's life celebrated, I couldn't help but selfishly wish that I had been Steve's best friend. And I couldn't help but wish I was more like him. If nothing else, Steve's life, and sadly his death, has taught me that I could be a much better person. It has taught me to appreciate the moments I have and ask myself how I would be remembered if I died tomorrow. And Steve has taught me that, even faced with the tragic inevitability of dying an early death, it is possible to face it with grace, courage and dignity.

That truly is a testimony to a life well lived.

What a wonderful post Tim. It had me in tears. He sounds like an amazing person. We're lucky to have at least one person like that in our lives.

I've lost a couple of friends in this last year and I felt exactly the same way. I wasn't their closest friend but it made me wish I had been.

That was so moving.

What I find so fascinating about your blog - and why I save the link in my favourites and continue to read it - is the way you go from random ramblings to something painfully personal.