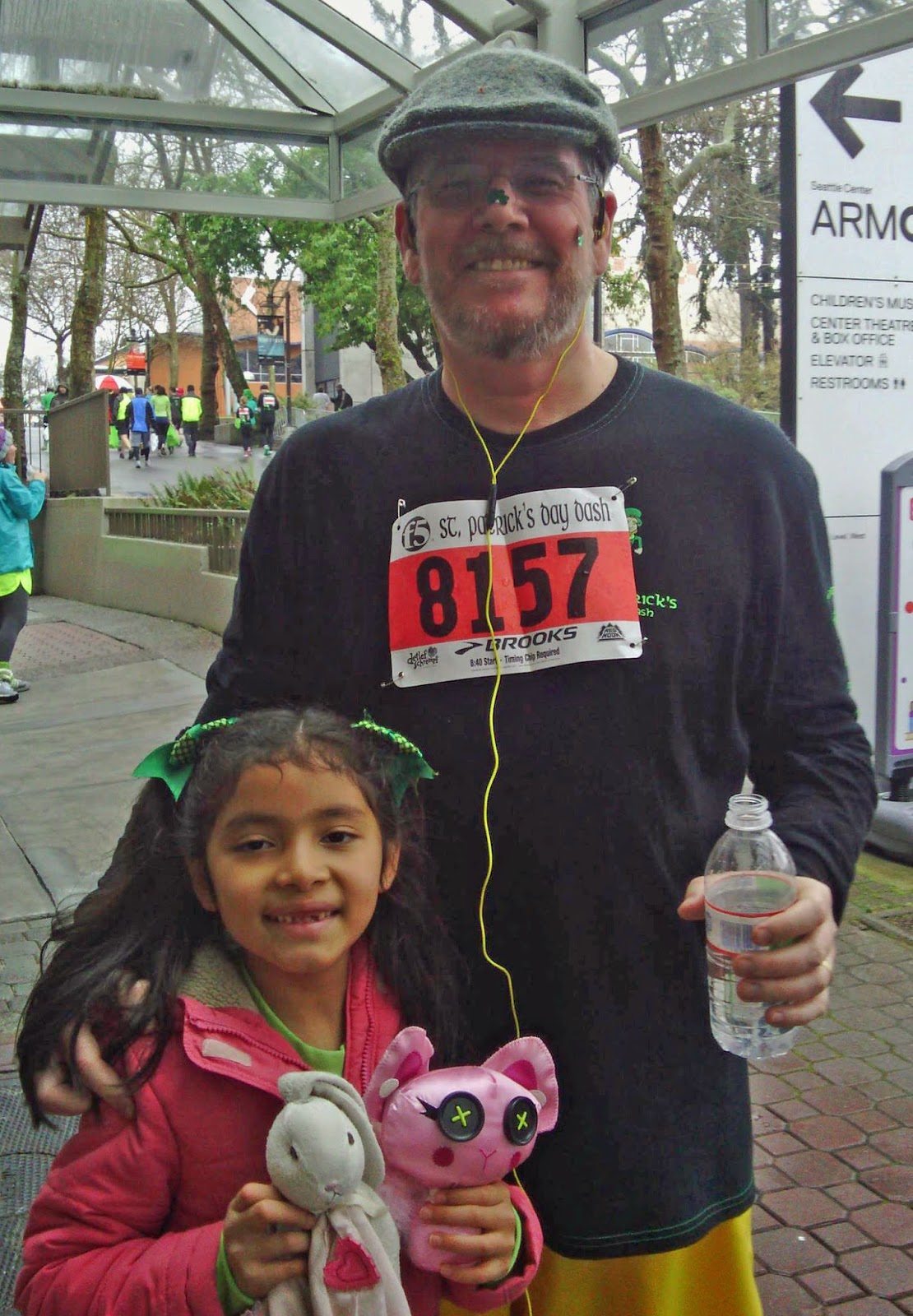 Let me get this straight, I don't consider myself a runner. I don't believe I have ever found myself in "the zone" nor have I had an adrenalin rush from running. I am what I would describe a "reluctant runner." So when I say that I ran in the annual St. Patrick's Day Dash in Seattle yesterday, I don't want anyone to get the idea that it is something I do on a regular basis.

My wife and children have walked in the Dash in the past. Well technically, my wife and I walked and my children sat in strollers while we pushed. The first year we were in the race, it rained and then snowed. Last year, I think it just rained. But this year my son declared he'd had enough. So he and my daughter simply ran in the Leprechaun Lap just before the dash (a half-mile sprint) and I signed up for an actual timed portion of the Dash which has four waves of runners/walkers. Only the first two waves are timed. I ran in the second wave.

Fortunately, the Dash is not a hard core running race. Many people wear costumes. And just about everyone wears something green. It is, after all, a St. Patrick's Day run. I felt sorry for the people who chose to wear more elaborate costumes for the race since it was pouring rain the entire time. It was also a bit cold and breezy. At one point I found myself lodged between a green Bigfoot and a woman with an inflatable beer stein on her back. The Bigfoot was pretty waterlogged and the beer stein woman was fighting not to be carried off by strong gusts of wind.

I grew up believing I was of Irish descent. That belief was dispelled when we learned my father was adopted. And despite not being of Irish descent, I still get a bit annoyed that your average American perceives that the Irish run around dressed like leprechauns while swilling mass quantities of green beer. Heck, my daughter had a presentation in her first grade class by one of her classmate's mother. It was on their family's Irish heritage. My daughter came home wearing green Mardi Gras beads with a shot glass attached that the mother had handed out. She'd also gave the kids green shamrock cookies. That was her own view of her Irish heritage. Nothing about the history of the Irish in America and how they had helped fight our Civil War, built our railroads and pretty much ran the police forces of many American cities.

So I ran the St. Patrick's Day Dash. I didn't break any records, but I finished the race despite the pouring rain and the green debris scattered on the roadway by the other green clad runners and walkers. And why did I do it? Well I really wanted the run t-shirt.

What doe you expect from a middle-aged, non-Irish man who is now closer to 60 than 50?