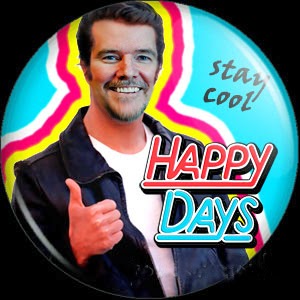 A man who pulled a rickshaw in Calcutta was interviewed and he seemed extremely happy even though he lived in shack with walls of black plastic. He was, in fact, happier than most middle class Americans living in ramblers and driving 2.3 cars. There was also a surfer in his 60s living in Rio who only needed a good wave to make him happy. He was also happy nursing baby birds that fell out of trees near the beach shack he lived in.

The consensus of the psychologists interviewed in the documentary was that having a good social network (again, not Facebook) and engaging in things you enjoy doing were more likely to make you happy than acquiring things or laurels. But they did point out that neither a state of happiness nor a state of misery were necessarily sustainable for long periods of time. It's kind of like when the Seahawks won the Superbowl. Everyone here in Seattle was ecstatic for a few weeks. Then one day I was driving with my five year old son and he asked me, "What's with all the Seahawks stuff still up?" I replied, "They won the Superbowl!" He pondered that for a moment and said, "But that was weeks ago."

There have actually been studies done that have shown that in some cases having something tragic happen in your life could actually lead to happiness. Case in point was a story of a woman who had been a debutante and a beauty queen in her youth. She married a successful rancher and had children and was very popular in her community until one day her sister accidentally ran her over with a truck and dragged her several yards. She was horribly disfigured and endured many painful operations, but never regained the beauty she once had. Her husband divorced her. Sounds terrible, but the woman came out of it, met a man who loved her for her inner beauty, remarried and is living a much happier life. I'd say she was happy as a clam, but I don't want to open up that can of worms.

Psychologists also pointed out that, although material things and money don't necessarily lead to happiness, being happy can often lead to being more successful and well liked. This can in turn lead to making more money and acquiring more material things. There has to be a paradox there somewhere.

I think that happiness is a relative thing. I think most of us want to be happy, but we don't really recognize it when we are happy (but then is it really being happy if we don't know we are happy). Or our remembering self remembers something as a happier moment than it actually was and our experiencing self is frantically chasing the happiness butterfly as it flits around just out of our reach.

That happiness is an elusive thing is evident in the way we try to wish it for people (i.e. "Happy birthday"). Or we use it to show people just how unhappy they have made us (i.e. "Are you happy now, you made your mother cry.").

If happiness was truly a destination, all we would have to do is go to Disneyland, the Happiest Place on Earth, to find it. However, if you have been to Disneyland and plunked down your several hundred dollars for tickets, stood in line for hours just to find the ride has broken down, listened to happy children crying loudly because they were frightened by one of the Disney characters then you have to question whether theme parks really can dispense happiness.

I don't really know how to define happiness anymore than I was able to determine what my passion in life is or was. I don't think you make yourself or other people happy. Happy happens when you stop trying so hard and just let go.