What ya gonna blog about it? 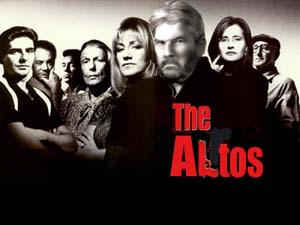 Bless Amazon. Despite all of their mega corporation faults, they have provided many HBO series classics for free on Amazon Prime. And you can download and watch them. I am on season six of The Sopranos, the series that made New Jersey crime families seem like regular Joe's (regular Joe's that cut people's heads off, cheated on their wives, set fire to horses and stole indiscriminately).

I guess I'd seen all of The Sopranos episodes over the years, but nothing beats binge watching six years of a classic to maintain continuity. The thing I've always hated about watching a series on HBO or Showtime is that you never seem to be able to catch them from the beginning unless you DVR them or watch them on demand. So I think I originally watched The Sopranos in fits and starts and out of order.

Tony Soprano is my favorite character. He goes from being a lovable, teddy bear kind of a guy to a raging sociopath in a second flat. He can be caring and kind one minute and beating an employee's head in with a telephone the next. You gotta love this guy.

But the thing about Tony is that they peel away the stereotyped Mafia boss and show you a middle class New Jersey guy who has a big house in the suburbs, a wife, two kids and the normal problems of a a regular guy. He even sees a therapist to try and resolve issues with his mother. The only difference is that Tony makes all of his money illegally and now and then has somebody whacked.

I have no idea whether The Sopranos depicts a realistic view of organized crime families. All I know is that the plots and the writing was genius. I loved hating all the characters. Though the dream sequences got a bit out there. One dream Tony had was kind of like a scene from Dickens' A Christmas Carol.  In it were all of these people Tony either killed, had killed or caused to commit suicide (which seemed to happen to most of his mistresses). It got even freakier when Annette Bening shows up and makes a reference to Bugsy Segal (she starred as Bugsy Segal's mistress in the movie Bugsy).

But that's one of the things I loved about The Sopranos. They wove complicated plots that connected from season to season. It was kind of like watching Lost, only it made sense in the end.

I've never seen it - not sure why. It gained cult status in the UK. My loss!

As my six-year old son would say, "It's the greatest television show ever!"

By coincidence my parents were recently discussing the show - pondering buying the boxed set. Hope they do and then I can borrow it...