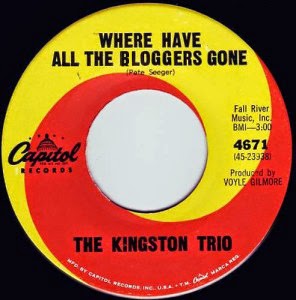 As I sift through my posts of the past in an effort find relevant content to share on Twitter (part of an experiment I'm engaged in with trying to understand social media), I've grown nostalgic reading all of the comments I used to get from fellow bloggers. Most are from my early years in blogging...2006 and 2007 were my peak years. And I've grown a bit melancholy wondering where did all the bloggers go?

I know I've harped on this topic off and on for years, but it still nags at me. It's one of those mysteries like why pods of whales beach themselves or what happened to the Roanoke Colony. Why did my little band of fellow bloggers who used to comment regularly vanish?


Though most of them were complete strangers, I can't help but take it personally. In real life, you generally get notice that people are dropping out of your life. The get new jobs, move, or drop out of sight due to something happening in their life that they need to deal with.

But in the virtual world, people seem to just sail away into the Bermuda Triangle, leaving this unanswered question of what happened? Did they get bored with my blog? Offended? Did they leave me for another better-looking, younger blogger?

Okay, I'm starting to creep myself out.

After ten years of blogging I really do accept that the Internet is a fickle place. Social media has made it even more fickle. There is too much stuff for most people to focus on any one thing for very long. And what I've learned from Twitter is that you really have to do a lot of marketing to even get someone to read a 140 character tweet let alone a 900-word blog post.

Not that anyone on Twitter is old enough to get that reference.

*bounces in from the UK*

I wonder how many blogs there actually are?

How many never get read even once?

*sighs and hops off*