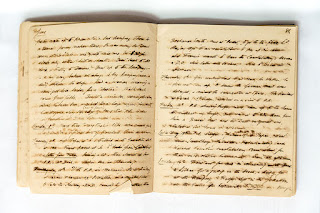 
I used to think that sharing anecdotes about my life, my likes, dislikes and pet peeves would make people who feel the same way have a sense of camaraderie towards me despite having never met me. But in reality very few people care what I like, dislike or make fun of. Why should they? I am a stranger on the Internet.

Or maybe not. I just know I would be fascinated to know who my parents really were other than the jobs they had and the place they lived and how they died. I wanted to know what their dreams were. What their fears were. What their regrets were. Those things were rarely discussed when I was growing up. When I tried bringing them up after I became an adult and was visiting my aging parents, they just looked puzzled and uncomfortable. Maybe it is because dreams and regrets matter little once you've crested the ridge and are staring at the inevitable.

In reality, I can't imagine my children ever sitting down and sifting through thousands of my blog posts trying to figure out who I am any more than if they had found a journal I'd written and sat down to read what I had for dinner on September 3, 2006.

And what happens to non-famous people's journals anyway? I'm sure they don't end up in libraries or archives. More likely than not, they end up in recycle bins after their belongings have been rifled through at estate sales.

Who is to say there will be anything left of my blog posts after I've died? What does Google do with all of the millions of blogs that have been started and abandoned? Do they ever go away? For all I know, some mega server could fail tomorrow and a decade worth of my ramblings could be lost forever.

Now wouldn't that be ironic Alanis?

But who would care but me? After all, it's nothing personal.
Posted by Time at 9:18 AM