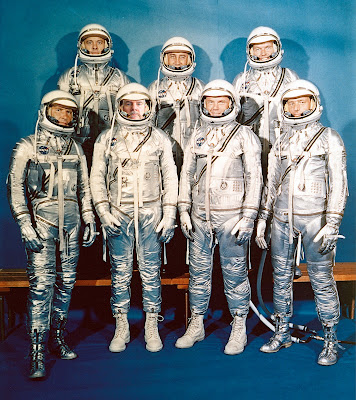 
I watched the last phase of the Mercury project evolve into the Gemini program and eventually Apollo. And in 1969, I was glued to the television as Neal Armstrong achieved the impossible and became the first man to walk on the moon.

I collected as much memorabilia about Apollo 11 as I could find and afford when I was eleven. I had mission patches and commemorative coins. I saved newspapers from the day. And I even had a "Fly me to the moon" t-shirt. I also stood in line for hours when a travelling exposition displaying the Apollo 11 command module and some moon rocks made it Idaho.

I remember Apollo 13 pretty well, too. I was in sixth grade and our teacher brought in a television so we could watch when the crippled spacecraft finally made its way back to earth. I remember thinking how sad it was for those three astronauts to go through all that and miss their opportunity to walk on the moon.

It wasn't until I read Tom Wolfe's book the Right Stuff that I got a peak behind the curtain of what the space program and the early astronauts really were like. It did strip away much of the romantic notions I held as a boy about being an astronaut.

By that time I'd pretty much left the dream behind anyway. Once NASA stopped moon missions and started the space shuttle program the romance was pretty much gone. When I was a kid I could tell you the names of most of the astronauts: Alan Shepard, Gus Grissom, Walter Shirra, Gordon Cooper, Scott Carpenter, John, Glenn, Buzz Aldrin, Neil Armstrong, Michael Collins, Jim Lovell, and Pete Conrad. I don't think I could tell you a single name of any of the Space Shuttle program astronauts except for Christa McAuliffe and that is only because her shuttle blew up.

Still there is part of me wishes I could have been a spaceman. At least my romanticized image of one. Because who, other than the gods of our mythology gets the chance to rise above the earth?
Posted by Time at 2:49 PM