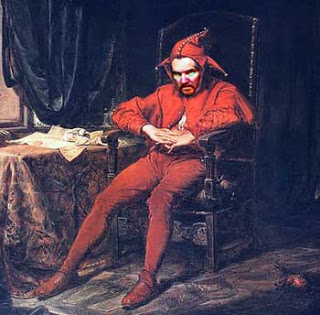 Can't believe April Fools Day snuck by me without so much as a Whoopee Cushion or joy buzzer. I guess April Fools Day just feels redundant with you know who squatting in the White House muttering and tweeting jibba jabba.

Not that I had any practical jokes in mind. There is quite the write up about practical jokes on Wikipedia if you are interested in why they are called practical jokes. I think the article also is a practical example of people with too much time on their hands.

Sometimes I miss a time before Wikipedia and not being able to immerse myself in the minutia of useless things.


I've been racking my brain trying to remember what some of my favorite practical jokes have been. One I learned from a chaperone on a band trip when I was a sophomore in high school. We were playing at a LA Rams versus San Francisco 49ers game in LA and got to go to Disneyland as a bonus. We also had a chicken dinner at Knotts Berry Farm. That's where the joke came in. They served us pie. The chaperone sniffed his and said it smelled funny. The kid next to him leaned down and sniffed his pie and the chaperone pushed his face in it.

Cracked me up. I played the joke several years later on my then 10-year-old nephew while we were having pumpkin pie at Thanksgiving and it was just as funny (to me). He is now over 40 and will likely remind me of the joke one day when he visits me at a senior home and presses a pillow into my face.

For whatever reasons I have always found "kick me" signs on someones back hilarious. It's not like people actually go up and kick a person who has a "kick me" sign on their back. Maybe it is the act of sticking the note on their back without them knowing it that is funny.

Come to think of it, it's not that funny.

Practical jokes just don't seem to be in vogue anymore. Maybe it is because we aren't as innocent anymore. The digital age has caused us to be cautious about everything. You can't trust e-mails because of phishing scams. Fake news is rampant on social media. Politicians are more full of it than they ever were. Photoshop has made it impossible to trust photos. And we have the biggest horse's ass in history prancing around in the oval office dropping bombs willy-nilly on random targets.

Guess we are all April fools.