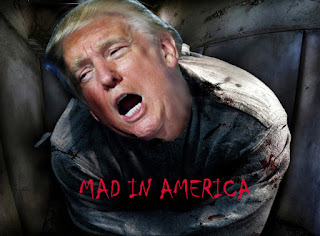 Seems like crazy in the US these days is the new black. Trump tweets new Twitter-babble almost on a a daily basis. And it garners more attention than the natural disasters ravaging the Caribbean.

It doesn't seem to matter to his "base" supporters (and I mean base literally).

Even the whack job North Korean dictator Kim Jong-un seems rational compared to Trump. He probably didn't expect to encounter someone crazier than he is who is willing to drop the bomb to prove America has bigger cojones than any other country.


I have never really understood why the Star Spangled Banner is played before athletic events. But then again, I never understood why we still force our school children to stand up and pledge allegiance to the flag at the start of every school day. It all seems a bit fascist to me.

Which brings us full circle to Trump. Cliche as it seems to compare him to Hitler, you really can't help but see the resemblance. He incites crowds. He doesn't inspire. He deals in lies and misinformation and shrugs off truth as not being relevant to his world view.

I also am sick of this return to Nationalism. The utter waste of building walls and banning immigrants is appalling. Now Trump touts that he wants to see everything with a "Made in America" label. Yet it has been shown time and again that many of his business interests and clothing lines use goods made cheaply in other countries. Because American labor is too expensive to use to manufacture most items. And Trump wants to deport all of the labor force that would be willing to work for less to allow America to compete in the manufacturing realm.

This is what happens when you allow the lunatics to run the asylum. 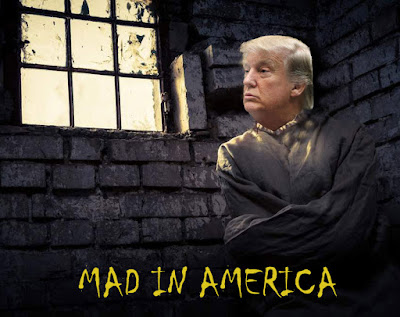 Postscript: Three days after I posted this even more madness gripped the country when a nutjob booked a suite at a Las Vegas hotel and proceeded to kill 59 people and wound hundreds more with a stockpile of automatic rifles. And no one knows why because the coward did what most of these mass shooters do: he killed himself so he didn't have to face the consequences of his madness. And still the gun lobbyists, the NRA and the GOP say gun laws aren't the answer. Because god knows it is every American's right to own automatic rifles to defend themselves. And the ultimate irony is the people they need to defend themselves from are other people with automatic rifles. Perhaps they should just shoot the mirror.