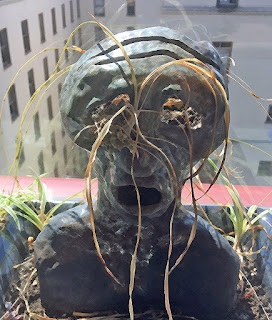 "In traditional Japanese aesthetics, wabi-sabi (侘寂) is a world view centered on the acceptance of transience and imperfection. The aesthetic is sometimes described as one of beauty that is 'imperfect, impermanent, and incomplete'".
--Wikipedia


I kind of wished I'd know about wabi-sabi when I was in my 7th grade pottery class. Then I could have rationalized all of those lopsided pots and cups as being created in the "wabi-sabi" style. But if someone came up to me and asked me what I thought about wabi-sabi back then, I would probably have thought they were talking about the green horseradish paste you put on sushi. Not that you could find sushi in Boise when I was in 7th grade.

Now that I know that wabi-sabi isn't something you smear on sushi, I'm really digging the concept that what makes something truly perfect is its imperfections. The wabi-sabi aesthetic also embraces aging of an object as it is used and shows signs of wear and tear. My 60-year-old self is totally into that.

Wabi-sabi values simplicity versus the intricate. It has roots in the monastic Buddhist traditions of starkness and lack of posessions. That part I have a bit of trouble with. I have always liked an abundance of stuff around me. I attract clutter and trinkets. A bare wall to me is an unpainted canvas dying for a portrait of dogs playing poker.

So maybe I am more of a Wabi-Kitsch kind of person. Though some may think I am simply a hoarder. I prefer to think that there is a method to my cluttered madness.

Clutter aside, I embrace the wabi-sabi concept that something incomplete is beautiful. I think of it as being like a jig saw puzzle. The joy in it is the process of completing the puzzle, not the completed puzzle (which is usually something boring like the image of a flower garden).

But wabi-sabi is also about impermanence. A flower blooms, wilts, decays and dies, becoming compost that nurtures future flowers.

I think of Dizgraceland as being very wabi-sabi. I'll be the first one to admit it isn't great literature (well maybe not the first one to point it out, though). So it is imperfect. It resides in the cloud on blogger.com. So god knows how long it will reside in the digital ether. So it is impermanent. And nothing is more open ended and therefor incomplete, than a blog.

I wonder if the wabi-sabi aesthetic also includes being self-serving.  Because then I am really knocking it out of the park.

Thanks Ash Green. Not as pithy as your blog, but I try. Or at least I include words in my post.