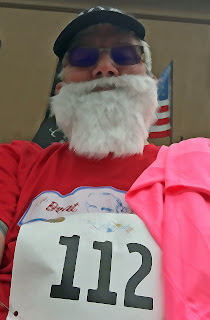 
When I was around 30, I started doing aerobics classes. I gave those up by the time I was in my mid-40s and then just used elliptical equipment and treadmills at athletic clubs. That's pretty much where I am today. 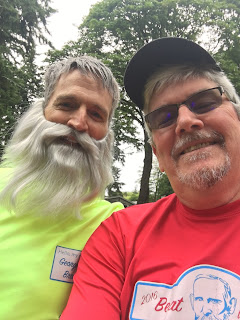 The reason I bring this all up is that I did a 5K race yesterday for the 4th of July. It was the Edmond's Beat Brackett 5K. George Brackett was the man who founded the city of Edmonds back in the 1800s. The Chamber of Commerce came up with this gimmick a few years ago to have fairly good runner don a fake beard (the guy on the left above) to look like George Brackett and have people try to beat him in the 5K.

Okay, I actually done about eleven 5k's in the past ten years or so, including maybe five Beat Bracketts. I have never beaten Brackett. I am content to just complete the race and get a t-shirt (though this year's t-shirt was a god-awful pink thing).

I used to think being in a 5K was a big thing. Turns out it is just 3.1 miles and doesn't really mean much to a real runner. They like half marathons and marathons.

I have no desire to enter into anything that has the word marathon in the title.

I am not really sure why I do these 5K's. I still don't like to run. My wife says it set a good example for my children. But they don't seem to notice I do them. No one is there to watch me at the finish line.

So maybe I just do it to get back at my 7th grade PE teacher Mr. Ackley for giving me a "C" because I sucked at running and sit-ups.

Or maybe I just do it for the free t-shirts (just not that sucky pink one I got yesterady."
Posted by Time at 4:06 PM