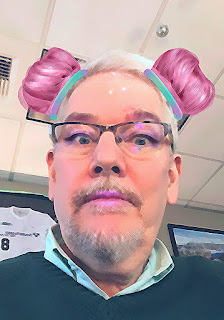 VSCO girl is a term, generally used as an insult, for a young, usually white woman who posts trendy pictures of herself edited on the app VSCO. Stereotypes of the VSCO girl include wearing scrunchies and Birkenstock sandals, drinking out of Hydro Flask reusable water canisters, saying sksksk and I oop, and generally seeking attention online.
--dictionary.com


Although I don't think there are many redeeming qualities found in TikTok, it has introduced me to some Gen Z terms that probably would have otherwise flown way under my radar.

Not that that would have been a bad thing.

However, when my teenage daughter started "sksksk..ing" the other day I joined her and freaked her out that I knew what a VSCO girl was. It's like I cracked her code.

Granted I have picked up other Gen Z terms while listening to my son while we play Fortnite. These include, "yeet," "salty," "triggered," "bruh," "chill," and "iconic." Oh yeah, and "ok boomer." Not that they originated all of these terms, they just co-opted them.

I've been trying to think of terms we had when I was a teenager. We said, "cool" a lot. Before something was "cool" it was "tough." "Far out" was popular, but mainly with John Denver. I don't think I ever said, "feeling groovy." In junior high, I remember a not so flattering term was to call someone a "fish." I'm not even sure what that meant. I still say, "dude" more than I should.

The thing I need to remember is that just because you know the terms the Gen Z-ers use doesn't mean you should use them. I tried "and I oop" on my daughter and she just rolled her eyes. But there is power in at least understanding what they are talking about without using the words yourself.