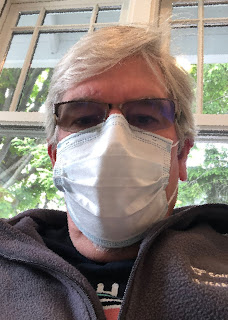 After three months with a stay at home order and getting haircuts out of the question (unless you find a rebel hairdresser), my hair was starting to remind me of the 1980s without the style. If I was a character from Scooby Doo, I would be Shaggy. It wasn't a good look for me.
The week before last our county went into Phase II of the recovery and things have started to open up including places that cut hair. I had hopes of losing the less than manageable mop for a more groomed look. But the place I usually get my hair cut (I hate to admit it, but it is one of those nasty chain hair cutting franchises that give assembly line cuts cheaply) was only accepting walk ins with an estimated wait of three hours.
At first I thought I'd just wait it out, but the thought of resorting to a man bun was weighing heavily on me. So I found a local salon that actually had online booking and an appointment available yesterday. I snagged it.
The place was within walking distance. It was a salon I'd tried to use a couple of years ago but I ended up boycotting them after arriving for an appointment and being told the stylist was running behind and I would need to reschedule. But swallowed my pride and decided now was the time to live and let live.
I arrived a few minutes before my appointment and followed the salon instructions to call when I arrived and they would let me know if I could come in. I called and they seemed surprised that I was actually following directions and told me I could wait inside or outside until my stylist was ready.
I entered and was told to was my hands and then have a seat. Everyone, including myself, was wearing masks. My stylist came and got me and showed me where to sit. We chatted a bit about my hair and then she started cutting.
Masks aside, I can't tell you how wonderfully normal the experience was. She cut a bit and then took me to a hair washing station and washed my hair. This was a pleasure I'd forgotten since I started having cheap haircuts that didn't include shampooing. Then she took me back to the chair and I watch hair falling everywhere like a sheep being shorn. I almost cried, it felt so good and normal.
Finally, it was done and I was a bit sad, but I marvelled at my closely cropped hair. 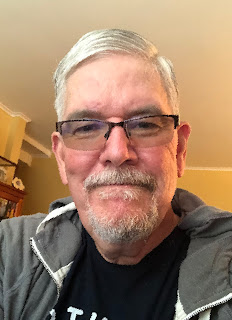 If nothing else comes out of this nightmare of a year, I have grown to greatly appreciate the little things.
Posted by Time at 1:58 PM

I haven't been to the hairdresser since February...

So are people calling you Shaggy Baggy?

Not to my face.

I suspect that may be because it is hidden by your hair by now.

Ah! That explains so much.