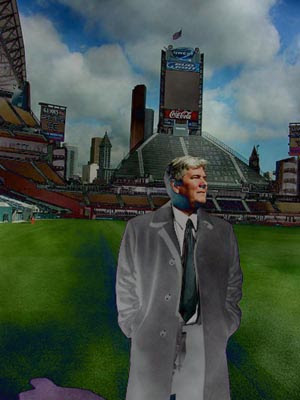 "When I wake up early in the morning,
Lift my head, I'm still yawning
When I'm in the middle of a dream
Stay in bed, float up stream

Please don't wake me, no
don't shake me
Leave me where I am
I'm only sleeping"

We are such stuff
As dreams are made on, and our little life
Is rounded with a sleep.

Everyone and everything seems to dream.

Anyone who has ever had a pet, knows that animals dream. We conjecture that the dog's jerking leg actions are a sign that he is perhaps chasing a rabbit in his dream. Tess' cat Keliki makes odd sounds when he sleeps. Since he is from Jakarta and weighs in at about 25 pounds since he moved to the U.S., I conjecture that he is dreaming about food or perhaps stalking lizards back in Indonesia.

Regardless, we accept that most creatures dream. And we accept it, but none of use really understands what a dream is.

Oh, the scientists like to attribute dreams to the equivalent of a brain fart. They say it is just the brains way of digesting what happened during the day and doing a data dump as you sleep. Okay, I don't know about you, but if all I did was dream about what happened during the day, I'd really go bats. It's bad enough sitting in meetings when you are awake, but I couldn't deal with reliving them in my dreams.

So what are dreams? Science fiction writers have played with the concept that dreams are simply another reality we enter during our sleep state. Every creative writing student at one time or another have written a story where the lead character discovered that their dreams were reality and their reality was a dream. Human beings love paradoxes.

Years ago, I read all of the Carlos Castaneda books about Don Juan, the Yaqui sorcery that taught Castaneda about magic and the other world. Don Juan really played up the concept of lucid dreaming...becoming aware during a dream and eventually being able to control the dream. He referred to it as the "art of dreaming."

I always thought that this was a pretty cool concept. But it isn't as easy as it sounds. Don Juan suggests that one way to know you are dreaming is to force yourself to look at your hands in your dreams. It is because your hands will always be there. The trick is taking control of the dream at that point and becoming awake in it without waking up in the "real" world.

If this sounds far out, it is because it is. I'm pretty much simplifying what Castaneda took umpteen books to explain. And though I've read them all, I confess that his books weren't presumably intended to make sense unless you were sitting on a rock in the desert whacked out on Peyote. His rambling, repetitive and often nonsensical style of writing always left me thinking I was trying to grasp a dream.

But I'll be damned if on a couple of rare occasions I didn't actually experience a lucid dream that I briefly controlled. The most memorable was finding myself outside at night next to a house I didn't recognize with a perfectly manicured lawn (so we know it wasn't my house). I looked down at my hand and saw it vividly. But it pulsated with color. I reached down and stroked the grass and could actually feel the dew on it and smell that wet-grass smell. But then I woke up.

I know it doesn't sound like much, but I actually felt I was awake in a dream and briefly controlled it. Imagine the possibilities. Because I don't know about you, but I can have some pretty elaborate dreams that sometimes rival a George Lucas Star Wars script in fantasy and detail. Now if I could actually control the plot of my dream and manipulate the characters, that would be entertainment.

But instead I find myself trapped in dreams of working at the Boise Public Library. The computer is down and we are checking out books by hand, writing down the individual bar codes. A line of people waiting to check out books stretches into the distance and they are all pissed at me because the computer is down. This is one of those dreams I was talking about that is actually based on what used to happen on a regular basis when I worked there as a teenager.

I also have lots of dreams about guerrilla warfare and escaping from roving bands of marauding soldiers. Often these dreams include hiding in foxholes and waiting for a bayonet thrust. Past life dreams, perhaps?

Many of my dreams thrust me back into my childhood home in Boise. Those dreams also incorporate my grandmother's house (she lived next door when I was growing up). Her house was built in 1905 or something like that and had the scariest basement I'd ever seen. It had this coal burning furnace that literally looked like something Freddie Kruger would be stoking. So dreams about her house still freak me out.

And I have dreams that I'm back in college and have neglected to go to a particular class (usually math) the entire semester and suddenly realized that I needed it to graduate.

When it comes down to it, I enjoy dreaming. I can't imagine what it would be like not to dream...even when I am awake.

To die, to sleep;
To sleep: perchance to dream: ay, there's the rub;
For in that sleep of death what dreams may come
When we have shuffled off this mortal coil,

This was awesome. I'm so glad you made it yours and improved on it. Not much of a conformist are ya? Yeah, I know...we covered this in "the blue guitar".
I laughed out loud (at work) when reading the Madonna section. Had to share with a couple of coworkers.
The Freddie Kruger reference was perfect. You should post a story about grandma's house.
I feel like I missed something...do you work in the marketing dept of public transit?

Thanks Shandi,
Sad thing is that Madonna and I are about the same age.

I suppose I could write about my grandmother's house.

Yes, I confess, I am the marketing manager for a public transit agency. But I get to ride the buses and trains for free.

Great spur of the moment post. Seemed to be in response to Shandi's dream post. Nicely done. Also enjoying the photo shop altered pictures. As for Casteneda. The guys nuts. Tried to read him in college but it didn't make a bit of sense. I am not sure he was even writing in english. And it's not that I can't follow a convoluted story. I have read and, I think, understood both Kurt Vonnegut and Robert Anton Wilson. But this guy was too much.

Thanks Lights in the Wake, I think Castaneda is a nut, too (albeit a rich and published one). I'll take Vonnegut any day over Carlos.

Lucid dreaming is hard to learn, but there are a lot of effective techniques for learning how to wake up in your dreams.

Lucid Dreaming: Induction Techniques' from Wikibooks is the best source I've found on a summary of these techniques:

Go to the section on Induction Techniques

It's worth the effort to learn to lucid dream!