The Rolling Stones are gathering moss

About 24 years ago the Rolling Stones played a concert in Seattle in the King Dome (which has since been imploded to make way for Qwest Field). I was a journalism major and writing a humor column for the college newspaper. All anyone could talk about was the rare opportunity to "SEE THE STONES, MAN!" So I wrote a column about non-conformists and in it I proudly declared that I wasn't going to the Stones concert. AND, I added, I don't even like the Rolling Stones.

You would have thought I'd spit on Mother Theresa. But it was true. I don't like the Rolling Stones. Oh, some of there older stuff was okay and when I was in high school I kind of liked the song "Angie," because it made me think of this girl I had a crush on at the time (though her name was Robin, so I'm not sure what the connection was). I don't get the hype about Mick Jagger. I swear he and Don Knotts are the same person.
Anyway, you can imagine my annoyance yesterday morning when I see a broadcast of a press conference being held to announce the Rolling Stones are once again going on tour and they will be playing Seattle.

Give me a break. These guys are in their 60s. Can't they just age gracefully and sit in a mansion somewhere with their platinum records on the wall? Must we endure a geriatric Mick Jagger strutting around the stage like a rooster in heat while Keith Richards has a flashback staring at the bright lights and trys to remember what year it is?

It's bad enough that Cher won't stop touring and Neil Diamond is on the road again. And I know Paul McCartney is touring again, but at least the Beatles never sold out and reunited (granted only two of them are left). Can't the Stones simply be content with being part of history.

What's worse is that they are releasing a new album. Jagger is quoted as saying the band will "dig into the catalogue" for this tour and also play songs from its upcoming album. This means we'll have to endure a promo blitz of radio stations playing some crap single they are releasing. It will probably be a duet with Brittany Spears or other crap pop artist to help the band appeal to a "younger" audience.

Not that the younger audience can afford going to their concert. I went online out of curiousity to see how much tickets to their concerts were running. In San Francisco, tickets range from a low of $150 apiece to front row seats at...get this...$5800 each. For $5800 I'd expect to see someone pass a stone, not just four aging Rolling Stones.

I suppose it is human nature to want to continue to hold on to our fleeting youth. Heck, I'd be thrilled if people would fork over $5800 to watch me shuffle across a stage mumbling "Start it up." But one look in the mirror tells me that will never happen.

I've heard some comments that the Stones will keep touring until they are dead. Has someone checked Keith Richards pulse lately? 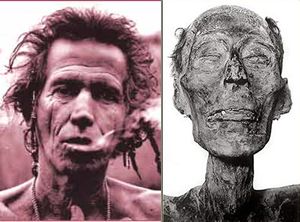 So, it has all come full circle. Twenty-four years after I wrote it first, I have to say it again. I'm not going to the Rolling Stones concert when they come to Seattle even if someone gave me tickets because I DON'T LIKE THE ROLLING STONES.

Amen brother. I have never been able to understand why the Stones are so revered. On the other hand, I'm a big Jethro Tull fan, so what the hell do I know.

The Rolling...whats???? A little before my time.
"pass a stone"??? That's hilarious. The image of old "what's his face" being passed through the aging colon of another band member from...what's it called again? Anyway, that's damn funny.

Five grand for the opportunity to see a geriatric fall down and break their hip. I'm glad the recession we're in isn't affecting people's ability to raise the limits on their credit cards.

In the temporary loud-loud-speaker deafness after the performance the uncomfortable thoughts will slither like so many phono plugged adders into the unusual quiet of their starving "consumertainment" minds: The concert really sucked.

They will try to drown out the seditious insecurity. They will imagine what they will tell their peers once their hearing gets good enough to distinguish the tin-can sounds of appreciation being emitted from the tiny transducer embedded in the guts of their cell phone. By the time they can hear their custom "Sympathy For The Devil" ringtones the concert will have become a grand spectacle which may even impress Old Scratch himself should he ever hear them tell the tale.

I passed a stone last year and flew all the way to Seattle to do it. I didn't think to videotape it, but had I known, I surely would have. That lithotrypsy treatment costs a fortune.

Lights in the wake, you have to admire Jethro Tull. Not to many people can get away featuring a flute in rock-and-roll music.

Shandi...before your time? Ouch. Actually they were a bit before my time as well...er at least before I was a teenager. I was a Beatles fan myself.

R. Welcome back. And you are waxing poetic as well. But it's not nice to have a broader vocabulary than Tim-Elvis.

And Craig, which Stone did you pass? Mick or Keith?

Tim, I'm with ya buddy. I think that I'm closer to Shandi's age bracket (at least I'll fantasize that I'm that young,) but I seem to remember when the Stones' had their FIRST farewell tour. I think that was back in 1983 or so. I didn't have any interest then, nor do I now.

Hey Jim! Welcome to Dizgraceland. Yeah, the Stones first annual farewell concert was actually in 1981, I believe. Pity they aren't like a fine wine as they age. Now they are more like a fine whine.