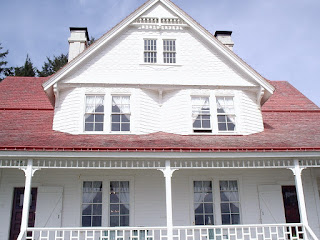 It's been suggested lately that I turn my normally dark outlook on life, expressed through my short stories, more towards the lighter side and try and write about frolicking bunnies (and not cavorting bunnies because that would be too sexual in nature). This request comes from a person who insists they are not Stephen King though they have strong ties to Maine and have some pretty sophisticated knowledge of the Master of Macabre, so me thinks they doth protestith too much if you catch my drift.

Regardless, I do have some history of including rabbits in my writing (see "Silly Rabbit, Tricks are for Kids from August 2004). And then there is that whole Tim the Enchanter bit in Monty Python's Holy Grail with the evil, killer bunny.

Anyway, you can imagine my surprise when I am going through some photos to find my lighthouse shots from our trip to the Oregon Coast in April 2004 and I examine the photo you see above of the lighthouse keeper's house at Yaquina Point Lighthouse. Look closely at the window at the lower right. See that little white object standing in the window? Here's a closer look: 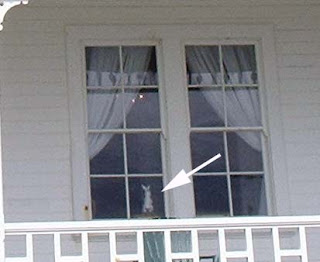 Am I mistaken? Is that is, or is that ain't a ghostly apparition of Mr. Peter "I'll rip your face off" Cottontail? Take an even closer look: 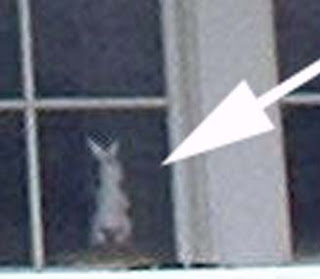 Freaks me out. I swear this is an undoctored photo. I remember even saying to Tess when I took it that maybe it would reveal some ghosts when I downloaded it from the digital camera. And smack my ass and call me Sally if that doesn't look like a spectral bunny to me. And it looks pretty darned hostile, as well.

Okay, it's not frolicking. But it has given me more fodder for my fertile imagination to further foster an idea that has been festering in my mind. Nice alliteration, eh?

I think I'll call the story, "The bunny's lair...."or perhaps, "Lair of the white bunny." Suffice it to say there will be much frolicking and despite the advice I've been given, a fair amount of cavorting as well (not to mention much tearing of limbs and shedding of blood to sate the evil bunny's hunger for human flesh).

I see a movie on the horizon as well: "Just when you thought Easter was safe, we bring you 'Lair of the white bunny.' You'll never hop down the bunny trail...alone, again." Or perhaps something more in the vein of an Alfred Hitchcock film promo: "There seems to be something very nasty and rotting in the Easter basket this year, but this time it isn't the rabbit who has died. "

Anyway, you get the idea. Rest assured, this story will have a hoppy endng or at least make you jumpy.

Creepiest thing I ever saw. I'm gonna have bunny nightmares for a week.

I am thrilled at your enthusiasm for this bunny project. I can see that it really struck a chord with you. Hell, you even went alliterative on us.

And continuing the Stephen King accusation from the previous posts...I did not admit I was King. If I were Stephen King could I do this...(imagine I'm doing something Stephen King would never do)? There, you see, I couldn't possibly be him. I hope we've laid this little matter to rest.

Hell, I once wrote a brochure about planning for a future transit system with the headline, "Get the jump on Rabbit Transit." It had the image of a bus with bunny ears.

So the seed has been waiting there. Glad you appreciated the alliteration. It comes naturally to me.

Oh, and the King thing...well, a nod's as good as a wink to a blind bat. Your little secret is safe with me (I did think "The Stand" was your best work, though.

I'm so glad you're seriously considering the bunny story. I really think the aparition is a sign... you were meant to write this story.

Oh and with regards to Stephen King... I think the Dark Tower Series was his best. And.. I think King would agree with me on this wouldn't you Lights???

How could one not seriously consider a killer bunny story?