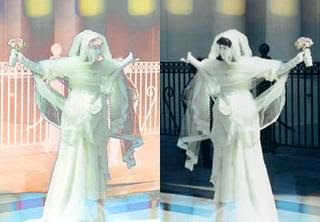 We watched the movie White Noise with Michael Keaton the other night. It's about an architect whose wife dies tragically and then stays in contact via Electronic Voice Phenomena (EVPs). For the ghostbuster technology impaired, EVPs are random audio or video recordings that capture messages from the dead (not Jerry Garcia, though he is technically dead).

I had mixed feelings about the movie. It was an interesting premise, but the Michael Keaton character gets a bit too caught up in taping static off from multiple televisions he has purchased and playing back the signals enhanced with mega computer equipment. A normal person would have stared at the static on his television and been pissed that the cable was out.

Coincidently, a day or so after we watched the movie, I saw an episode of Penn and Teller's Bullshit. Now, I don't particularily care for Penn and Teller. They are about as amusing as a hang nail. But I am fascinated by the number of times Penn is able to shout, "Bullshit" in a 30-minute period. Anyway, this particular episode was about ghosthunters. And they of course touched on EVPs. In their usual degrading fashion, Penn and Teller made two groups of psychic investigators look like complete morons as they snapped digital photos of closets and gloated over magnetic readings jumping near light sockets. And Penn and Teller had a couple of "genuine" scientists come on the program to tell us that psychic investigators are full of...you guessed it...bullshit and that there is no such thing as a ghost.

I've got to admit that I was disappointed. Just once, I'd like to watch a program about psychic phenonenom that actually shows us evidence of an afterlife. I would take great comfort in that. But most of the time all they can really show us are photos with psychic "orbs" and recordings of static that when listened to 500 or so times begins to sound like a ghostly voice commanding us to "drink Ovaltine."

My mom used to take lots of snapshots with "orbs" in them when I was growing up and we just thought it was due to a crappy camera and having them processed at K-Mart.

I suppose the closest thing to a EVPs I've ever experienced was a few months ago. I was cleaning out a drawer and I found a cassette tape with a "talking letter" my parents had sent me at least 15 or 16 years ago when my father was still alive. I popped it into a tape player and hit play. And though I knew it was a tape sent my parents years before, I was still startled to hear my father's voice say, "Hi Tim, I just wanted to say hello and I hope you are doing well." Then the tape broke. My father has been dead for 14 years. Sure, it was recorded while he was still alive, but it freaked me that that would be the one phrase I'd hear and then have the tape break.
And for some reason it was comforting to hear my father's voice checking in with me to see if I was okay.

It strikes me that the sad thing about the whole desire to communicate with the dead is that we don't generally put the same amount of effort in communicating with the living. Take my mom for instance. She's 80-years old. I love her dearly, but I really don't call her as much as I should. I catch myself getting annoyed when I do talk to her. I'm impatient with her stories about what she ate for breakfast or how her dog chased a squirrel. I can't wait to hang up the phone and get back to my "fast paced" world. So it dawns on me that rather than being put out by the time I am wasting talking to her on the phone, I should be grateful that I still can talk to her.

But, my callous selfishness aside, I still hope there is an afterlife. I just hope it doesn't involve sitting around, shouting random phrases into a microphone in hopes someone will hear me. Maybe, just maybe, by the time I die, they'll figure out a way for us to blog from the afterlife.

I just hope the wood doesn't follow me there.
Posted by Time at 11:04 AM

I do not believe that there is any sort of afterlife and am perfectly content with the idea that I will cease to exist in any form upon my death. Throughout history, however, man has desperately attempted to convince himself that there is something after this life. So desperate is man for this to be the case that he will go to great lengths (and indulge in amazing self deceptions) to demonstrate that it is so. Naturally, contacting the dead would go a long way toward proving an afterlife, so much effort is expended in the attempt. Successfully contacting your mother by phone, while nice, just doesn't have the same implications.

On another topic: Did you see that Lance Armstrong has been disqualified from the tour de France. Appearently, officials found three substances in his trailer that have been baned in France. Soap, deoderant, and toothpaste.

Don't underestimate what it takes for me to call my mother. Especially the way I feel about telephones (see "Alexander Graham Bell is the Devil" entry some time ago).

Ha! A French joke! But of course!

It's ok to misspell French words while making fun of the French.

My only direct contact with the French was at a Club Med on Martinique several years ago. We were divided into two groups, those who spoke French (which I did not) and those who did not. And we were treated accordingly. All I can say is that a culture that encourages wearing black socks with a Speedo shouldn't be dissing someone who can't speak their language.

I like Penn & Teller but only because they are, in my opinion, such loveable shysters.

If you read some of their books they talk about "forcing." When applied to a deck of cards you somehow "force" the person to pick the card you want them to via distraction and digital manipulation.

So of course P&T's program is only going to feature bullshit. It's their show and they'll "force" the deck and find the bullshit card every time - and lets face it, there are plenty of bullshitters out there who keep P&T in business.

As for EVP I tend to lean towards it being a legitimate phenomena. I laugh at Hollywood's version. Anyone can hear anything in a bunch of static - that's how I hear music in the white noise from the fan. My leaning is based on the number of replications reported from all over the world using a bunch of different brands of recorders both digital and analog and in the case of analog using different brands of blank unused magnetic tapes.

It's an incredibly easy experiment to conduct: Get a tape recorder and a ton of blank tapes or a digital recorder. Use an external microphone. Walk around at night in graveyards, old prisons and hospitals while recording. Review the tapes for any clear language that wasn't yours or someone else's in the vicinity. Do you hear something non-random and intelligible? Yes/No.

If you find recordings with intelligible anomalies run the data through some sort of statistical analysis to eliminate the possibility of imagination. Is the anomaly non-random enough to possibly be something else other than noise? Yes/No.

As for the speculation that these electromagnetic phenomena are "ghosts" - I don't know and I really don't think there's an experiment that would adequately settle that question.

The "Ghost Investigators Society" is the group whose website I occasionally read. They don't seem to be big on technology but they do tell a good story and have plenty of things on their site to listen to. I've been severely spooked when listening to their EVP's on Coast to Coast AM with Art Bell.

R. You never cease to amaze me. That was a nice, logical look at EVPs. Perhaps EVPs are subliminals broadcast by the spirit world to influence this reality. I've got to start paying more attention to static. I'll check out that Web site.

In all seriousness, my grandfather used to listen to the radio during the night. He purposely had it set on static. He said that it blocked out the voices. Yeah, now that I'm an adult, I know that he was crazy.... but I found it interesting that here we have the opposite happening. Using static to block voices rather than tune them in.

I think that is funny, too that white noise has often been touted as a way to shut out background noise and help us sleep. And ironic that your grandfather used it to block out the "voices" when it could very well have been the source of those voices.