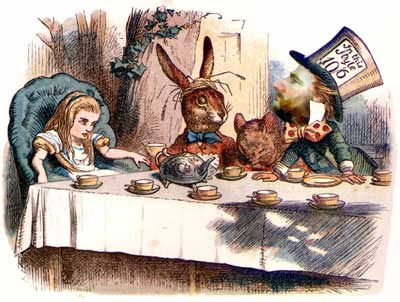 The phrase "mad as a hatter" existed before Alice in Wonderland disparaged the hatter anyway. It probably stemmed from that fact that hatters (people who made and sold hats) used to use mercury to cure the felt some hats were made of. During that process they inhaled lots of mercury fumes which caused brain damage and eventually progressed to having hallucinations and the random psychotic episode.

This fascinates me because I have often wondered if you were "mad" would you actually know you were "mad." The hatters probably assumed they were simply engaged in cutting edge marketing as they paraded up and down in front of their shops naked (except for a hat) screaming "Twinkle, twinkle little bat."

I suppose there are various levels of crazy (a bit off, touched, crazy as a bedbug and major whackjob). And I suppose there are socially acceptable levels of crazy (wacky, zany, and eccentric). But how do you know you are crazy? Oh sure, you can be examined by a psychologist or psychiatrist. But most of the mental health professionals I have met are pretty much major whackjobs themselves and are no ones to judge (a rash generalization I know, but it is my blog).

I've also never really bought off on the "not guilty by reason of insanity" defense for murder. In my opinion anyone who kills someone is a psycho and needs to be culled from the herd anyway. I feel the same way about "temporary insanity" arguements. Give me a break. That could just about give you license to do anything you want say you weren't at fault because you were "temporarily insane." A lapse of judgement does not make you insane.

I suppose this post stems in part from my most recent post about the whacked out crack heads and in particular the screamer on the sidewalk with the Shop Vac. It also stems from a news story I saw yesterday about a nutcase that was on trial for attacking a woman in Washington. Five guards had to subdue him and wheel him into the courtroom shackled and masked like Hannibal Lector. He still shouted obscenities until the judge had him removed from the court. The reporter said he had been examined and some doctors said he was competent to stand trial. Others said he was faking it.

So isnt' that a paradox? Are you sane for faking you are insane and insane for trying to pretend that you are sane? The guy attacked someone. Having to be trussed up to a chair while you howl like a Gibbon in heat is crazy even if you are faking it. It also doesn't excuse him from the crime he committed (I don't have to say allegedly committed because this is my blog).

We live in an insane world and sometimes it drives me crazy.

But only temporarily (and I'm faking it).
Posted by Time at 9:52 AM

Sometimes I think I'm crazy. Isn't everyone at least a little bit crazy?

And I totally agree. Being crazy doesn't excuse a person from any crime.

who can define crazy? it seems crazy to attempt it -

being crazy may not excuse someone from committing a crime, but in my opinion should alter how we deal with them. And no, that doesn't mean that someone who commits murder should ever be released again.

Physiologists now know that while kids may know right from wrong, that doesn't mean they are capable of understanding their actions. Should a 12 year old be tried as an adult for murder?

How did you conclude he was a rapist?

When a naked man, runs down an alley with a knife and a hard on,I didn't think he was collecting for the red cross!

Anna, Yes, I think everyone is a bit crazy at one time or another. It is a relative term. And I am proud to say I am totally bonkers.

Hayden, I think that was kind of my point. What is crazy? So it begs the question as to how we deal with someone who commits a crime and is crazy if we can't really define crazy. I hadn't intended this topic to branch out into whether children should be tried as adults. That would be crazy talk.

Steve,
I know what you're thinking...

sorry, I realized after I hit post that I was going too far afield in a direction far too serious......

Hayden,
Commenting means never having to say you are sorry.