Is it hot in here? 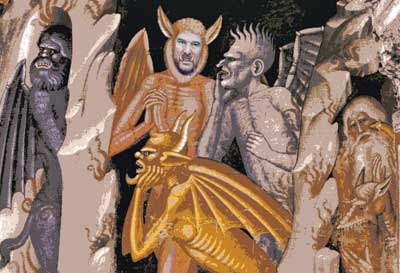 Look who's advertising
Billboards everywhere
"See Hellacious Acres
Your tailor made nightmare"
Traffic is backed up for miles
Attendants welcome you with devilish smiles
Steady...steady...
Have your tickets ready
Steady... steady...
Go to hell
After dark
It's a sin-filled city
An amusement park
It's a one way ticket to the other side
It's a Dr. Jekyll and a Mr. Hyde
See Lizzie Borden, she's one of the stars
And Tricky Dicky barkin'
Flashin' you his pardon
Jack the Ripper slashin' your tires
--Paul Williams, Hellacious Acres, A Star is Born

I don't believe in hell, a place, but I talk about it alot. Though I wonder, as many people who follow the television series LOST do, if all the characters are in hell or at the very least, purgatory. The two-hour season finale last night left us with the impression that all of the plane crash suvivors were finally rescued from the island. But a flash forward segment left us thinking that they wish they hadn't left the island. So perhaps they jumped out of the frying pan and into the fire.

But if you don't follow the program, than you are terribly LOST by this discusson (lost, as in confused as to what I'm talking about, not LOST as in the television series). I must admit I am feeling a bit lost that all of the programs I like to watch have aired their season finales. Gray's Anatomy, Desperate Housewives, the Office, My Name is Earl, 30 Rock and Sons and Daughters are all over for the season. Men in Trees and What about Brian are missing in action. And there are only two more episodes of the Sopranos and then it is lost forever (except in reruns and DVD).

Summer sucks when it comes to television. They are bringing back America's Got Talent with David Hasselhoff as one of the judges again. It's hard to look at him after that pitiful video his daughter filmed of him rolling around on his bathroom floor in Vegas drunk and trying to eat a hamburger. Though even that video isn't as disturbing as his music video of Hooked on a Feeling.

Dancing with the Stars is finally over only to be replaced by Racing with the Stars where we pit celebrities racing NASCAR's against each other. Jewell, the singer with bad teeth will be pitted against John Elway (former Broncos quarterback with buck teeth), and William Shatner (the Shat) who is just bad on so many levels. I'm not one to wish accidents on anyone, but I can only hope all of the transmissions fall out of the cars and the series finishes the race early.

American Idol is finally over and I'm just glad.

I'm sick of Deal or No Deal, too. And I refuse to watch Bingo.

My television god, why have you forsaken me?
Posted by Time at 8:35 PM

Have you considered that we're already residing in hell?
I have.
Can't really say for sure as I'm agnostic.(NOT agnostic theist)

What DID happen to Men in Trees?
I really like that show!
The only other one I watch(ed) is Dancing With The Stars.
My household revolves around sports.
The knuckle dragging troglodytes here can't stand much else.

Racing With The Stars ????
Too bad The Hof wasn't on that .... I'd LOVE to watch The Hof & The Shat try and over-act (BADLY) eachother off the track!

I absolutely love LOST but we are way behind you. I love Sawyer because he's HOT HOT HOT and Locke because I love he is a man of few words and the master of irony.

I also liked Men in Trees, it reminded me of Northern Exposure from years ago. I would love to live in a place like that. There were so many great characters in that show.

I'm rarely at home most nights so don't watch a lot of TV these days but summer viewing is pitiful everywhere I think. If you don't like in cricket over here you are stuffed for choice and I HATE CRICKET.

There is only one word to describe the Hoff and thats TRAGIC.....

Ghost Hunters is back with new episodes in June! Maybe they could give you fodder for new metaphysical musings.

Blazngfyre,
Could you imagine the DUI jokes if Hoff was on Racing with the Stars?

Angel,
I won't ruin LOST for you then (but Sawyer and Locke get killed in the season finale)


Kristy,
Ghost Hunters? Puleeze. If I want to watch grainy video of nothing I'll rent the Blair Witch Project.

Just messing with you. :)

I'm one of the few who managed to not get lost in LOST. Thank god. I am missing Grey's already though and you're right - summer TV sucks. Time to rekindle my withering Netflix account. JP

I've given up trying to get people to watch the new Battlestar Galactica (although it won a Peabody Award - Walter Cronkite wins Peabody Awards!!!), but I'm shocked you aren't watching Little People, Big World.

Iridethebus,
Isn't the Peabody award named after that dog from the Bullwinkle cartoons? I have watched Little People, Big World. I think it falls a little short.