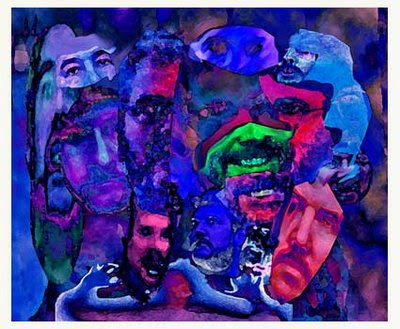 I'm beginning to think that maybe ignorance really is bliss. I've come to this conclusion because I think we may have reached the point where we have access to too much information in the world.

Whoever really invented the Internet is to blame. They are followed closely by Google. Wikipedia isn't helping either. What used to take weeks (if not years) of research can now be queried in the blink of an eye. The problem is that although a simple Internet search can turn of an unbelievably amount of information, there is no way to know how much, if any of it, is true.

Wikipedia is a great concept. It is this collective sharing of knowledge. The catch is that it is difficult to screen out bogus experts. And for every expert Web site on any given topic there are a hundred created by crackpots wanting to spout "truths" the voices told them to share with the masses.

I also think I have proved many times that you can't trust photos you find on the Web, either.

The other problem is that when you used to have a really cool, original idea, you could bask in self-delusion that it was an original idea for ages. Now all you have to do is google your good idea and discover instantaneously that thousands of other people already had your good idea years ago.

This is especially problematic for writers, poets and artists. Now in addition to writer's block, when we do have a breakthru we have to have the fact that we aren't as witty and original as we always thought we were waved under our noses electronically at the drop of a hat.

This is also problematic for would be entrepeneurs. Google your idea for a great product and you are likely to find it is already being sold. If not, you can bet a hundred other people will steal the idea the minute you slap it up on the Web.

I suppose in retrospect that there has always been misinformation in the world. It was just easier to contain when it was produced by a mimeograph machine.
Posted by Time at 8:42 PM

The people who control our freedom are the ones who tell us "the truth."

I find myself not getting enough information. Most of what I end up with is one of two extremes - explanationlite or unintelligible masters thesis material.

I call this "Too Much Interference."

Supposedly Google exists to aid in improving the signal to noise ratio but my experience is about 60%. Most of the time I use Wikipedia as a source of search terms to feed Google.

Research what is "out there" that is related to your idea and try to contribute. If your contribution is public it will be immortalized in archives for years.

Or, take what you find and give it a unique twist that makes it yours. You already do this with the photoshopped pictures.

Or, follow links instinctively until you find a source of inspiration. Who the hell knows where it might come from?

omg! I'm reeling with confusion and shock! Are you insinuating that the pictures you post aren't literally true, downloaded directly from a camera like mine are? (Except the ones I steal from the internet, of course)

R.
Well put. But "satisfying self-grandiosity" sounds dirty when you put it that way.

Hayden,
Why of course the photos I post are true replicas of reality at half the cost. Perhaps I could interest you in a watch, too?

You know, I was just thinking that eventually they're going to create stiff rules on information that you post on the internet. Copyright laws just don't seem to apply. Apparently all anyone has to do is put the words, "All material is protected by copyright laws" on your blog and you THINK no one is going to have the nerve to steal your stuff. They WILL and DO. I know, because I steal all the time (especially from you).

I think that quite a few people out there are under the mistaken idea that if something is in print, it must be true or at least resemble the truth. Trust me, you can't believe half the stuff I post on my blog ;-)

I love the internet, even with all the bullshit. I used to ponder things for hours, eventually trying to look up the information at the library. Before I got the first few reference numbers written down I had forgotten what it was I wanted to know.

By the way, I love this new artwork. You might want to print that one out and use it for the cover of your book.

You should try my approach to life. Never ask any questions. Asking questions just gets you in trouble. Besides, why do you want to know anyway? What business is it of yours?

Please note: the above questions were rhetorical and therefore do not count.

Shandi,
You steal from me? How could you? I've given you some of the best years of my blogging life and this is how you repay me?

Besides, I kind of like my nephews suggestion that we just take what we find on the web like a bum grubbing through a garbage can and give it a unique twist to make it our own.

PS: Glad you like the new image. It is an original. :)

Lights,
It is okay to ask questions as long as you question the answers.
I've decided to start speaking in quotable quotes or fortune cookie speak. What do you think?
That too is a rhetorical question.

Confucius Say:
When solving problems, dig at the roots instead of hacking at the leaves.

I like the pic it has blue in it!

I whole heartedly agree with you on this particular occasion.

you will meet an inscrutable stranger and miss an enormous opportunity he offers.

Love this pic Tim, don't think this one will give me nightmares although all the disjointed faces and mildly disturbing.

Blaznfyre,
I can dig that.

Steve,
I would expect nothing else from you but the truth.

Angel w/o wings,
Maybe it is something about my face that gives you nightmares.

Amen. For all the good the internet has brought into my life, it has shattered my self-esteem as a writer.

Kat,
Look at the bright side. Maybe someone has googled their good ideas and discovered you beat them to it. And for what it is worth, I think you are a pretty impressive writer.