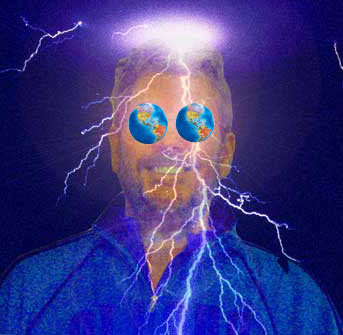 Well so is the world and it keeps revolving regardless. Mine just revolves around me.
Posted by Time at 8:32 PM

Haaa haaaa, my favorite masthead. "Dirty Doughnuts", it just doesn't get any better than that.

Do I get you? I've been thinking about this and I've decided, "Yeah, I get you". When you go to all the trouble of cleverly disguising a side-splitting joke in a photoshopped work of art and someone finds offence... well... they just don't get it. They don't get "IT" and they don't get "YOU". Now, maybe this is an elitist or narcissistic attitude but I say "Cut 'em loose". It's too damn frustrating to go about explaining yourself and apologizing for your sense of humor.

Most people don't have your wit. Most don't have interesting blogs. I know cos I've gone looking. Most are chat rooms. It takes a lot of time and energy to read countless blogs to keep the countless comments rolling in. It bores me. Yeah, that makes me sound like a snob. Oh well, I'm a SNOB. I'm probably also a bitch, but that's okay. I would rather be both than BORING.

You Tim, are NOT boring. You're funny and creative as hell. Test out the others; go about re-doing their masthead in a self-deprecating manner and see if they find it funny. Like your toothy vanilla photo, it may stir up hard feelings. I'm glad all that happened. It finally made it unbearable to put up with their lack of humor.

I don't know who took you off their blogroll, but he/she has got to be a flip'n moron. Maybe an IQ test should be a prerequisite to "Dizgraceland".

My general rule is this: If my joke makes me laugh, it's funny.
If my jokes are met with blank expressions and blinking eyes.... your loss. In fact, that reaction will acually make me laugh harder.

Just keep flapping your wings, little butterfly, and know you are causing a rainstorm in China.

Shandi, Shandi, Shandi... I have always accepted that you get me. And it is ultimately more satisfying to have a few friends who get you than a ton of acquaintances who don't or think they do and then lose interest when they realize they don't.

I'm with you. I refuse to read other blogs just to get comments. I don't deny anyone the right to blog about anything they want, but unless it is genuine, I'm not going to waste my time reading it. I don't need to read a meme of someone's top ten favorite breakfast cereals to get to know them. They can show me who they are by just being who they are.

You are right, though. I shouldn't worry about the people who don't get me. Screw them if they don't like ice cream :)

Oh, and the Aussie unblogrolled me was Whitesnake and I can only assume he had his reasons. Regardless, I deleted him as well, so there...na, na, na nah na :)

Thanks again, though for getting me from the beginning. I get you, too. Even your upolstery posts :)

Mikey,
Oh I think you do get it. And I know you really get Shandi's upolstery posts, too.

Do you find yourself sitting alone in a room laughing alot. I had an uncle who did that a great deal. He also thought the Red Chinese were tunneling under his house to get him (as in kidnap him, not "get him" in the "understand him" kind of way).

Okay, so I said it couldn't get any better than "Dirty Doughnuts" and then... it got even better.

So, it was Whitesnake huh? I'm surprised he stayed around as long as he did. There really was a communication break-down there.

Memes? I get at least one of those a week from my real-life friends. I guess they don't know me very well if they think they'll learn something from those stupid lists. Plus, when will they learn that I hate memes?

Wow, I'm feeling all crabby and full of myself. So this is what if feels like to think I know everything? God, I'm so glad I'm not 40 yet.

Well this Aussie "GETS" you and still loves you Tim. Is that any consolation?

yikes! heavens forbid I ever have a technical accident and drop you!

btw - I deliberately haven't updated the address on my links because when I tried to it wouldn't go there. which makes no sense at all. just wanted you to know so you don't feel neglected - if you're not there, it's all about ME (my technical incompetence) not you!

Shandi,
I couldn't resist lifting the cone of silence and screaming out. But you knew that. :)

Gypsy,
I know you get me, too. You are a Pisces though. That makes all the difference. Hope you get some rest.

Hayden,
The blogroll is an odd phenomenon. It's like wearing your heart on your sleeve literally. You can't remove someone from it without it being taken as a sign of disfavor (technical glitches aside). Combine that with silence and you know you are on the outs with someone. But then again, what do I know?

I take removal from a blogroll really hard...its so silly, but it feels like the worst kind of rejection. Reject my fiction, I'll get over it. Reject my LIFE? Now thats personal. Not only do I get you, many of your posts save me the trouble of actually writing about something that's on my mind.

Well put Kat. Rejecting our blog is more personal than rejecting our fiction. And thanks for what you said about getting me. That means a great deal to me.