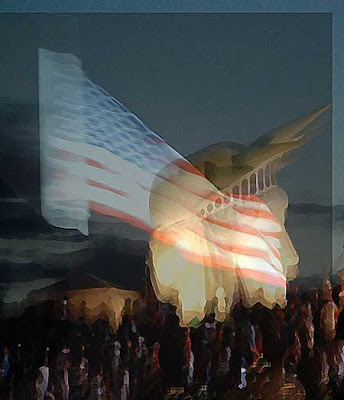 When I was a boy, I thought myself patriotic. The Fourth of July was one of my favorite holidays. I believed the stories about George Washington chopping down a cherry tree and Abe Lincoln never telling a lie. And though I'm sure they were relatively good men, I know now that those were just the myths created by presidential press secretaries.

But I suppose all holidays are built around myths: Santa Claus, the Easter Bunny, Pilgrims sitting down with the Indians (or Native Americans if you want to be politically correct about it), and Leprechauns. Let's not forget the little people from the old sod. Why shouldn't the Fourth of July be built around myths, too. So what if Paul Revere never really warned the people of Concord and Lexington that the British were coming? And who cares if the Sons of Liberty were really barflies and bullies pissed about taxes that really weren't that big of a deal. Okay, Ben Franklin was a womanizer and Thomas Jefferson slept with his slaves.

The truth doesn't make for good PR. But we need our myths. The truth rarely inspires. And history needs polishing or heroes quickly tarnish. Just like my parents, I have no desire for my children to grow up too quickly disillusioned by the lies of our forefathers.

It is too easy and cliche to blame the government for everything. The government isn't a thing. That is most people's mistake. They view the government as an malevolent entity that conspires against them. The government is simply people. And people operate out of one basic principle -- self preservation. Bureaucrats have families, too. Government workers have mortgages, pay taxes, buy groceries, and worry about their children. If there is a conspiracy in government, it is based on individuals trying to hang on, survive and pay bills.

I don't necessarily believe this is true for politicians. Politicians aspire to power. And anyone who aspires to power should be suspect and not trusted with power. Even the ones with good intentions bend to the addiction of power and sink into various forms of corruption to hold onto it.

I personally blame reality TV and Deal or No Deal for the downfall of civilization...or at least prime time television.

But the one person no one blames (as I've said before and forgive me for repeating yet again) is themselves.

And that is probably the one person who is really to blame.
Posted by Time at 8:31 PM

You noticed that too huh? No-one wants to take responsibility for anything if they can skilfully shift the whole enchilada onto someone else's plate.

Except I can't take responsibility for a leadership who so willingly trades my freedoms for political capital - especially the unelected leadership.

The American government was designed to limit the powers of those who seek power by playing them against each other in a three way smackdown: Executive versus Senate versus Judicial. In the stands are all the well armed (in terms of votes and guns), ignorant plebes who served as playing pieces. That way the people who were born to crave power could pursue their life, liberty and happiness too while not pissing on the plebes too badly.

The large federal government has completely changed the balance. Now you have unelected people in positions of power who wield paramilitary police forces who are also largely unaccountable for their actions.

I'm responsible for how I vote and how I conduct myself. The net sum of that is pretty infinitesimal.

Richard,
Since you have never worked for government or served as an elected or appointed official, and you don't trust the popular media, I can only assume you are basing your observations on secret Internet discussion groups. You may not accept responsibility for the leaders in power, but you do need to accept responsibility for what you believe and why. Run for public office and change things.

a) I've given much thought to whether or not a person like me would be effective in office. The answer is no. Elected officials serve as Machiavellian rudders to insure that the ship stays on course. Any attempt at changing course results in mutiny of the self-interested crew who, as you say, want to keep their jobs any way they can.

The most effective means to change our way of life is through terrorism. This was demonstrated on 9/11. However, the changes are away from freedom. I am not a terrorist and I believe from observation that terrorism on a homeland almost always leads the leaders to seize more power.

I postulate that if the majority of people chose to be responsible for their actions, terrorism would serve as an indicator to the people that perhaps they're not doing things right. Instead, it just makes them do what they were doing even more.

Democracy really is fragile and requires a decent balance of fairytales and enlightened self interest.

b) I've asked my wife in the past if I could run for office. She doesn't like the idea and feels that I'm not a very good public people person. I value my wife's opinions on such matters - but let's just keep that between ourselves.