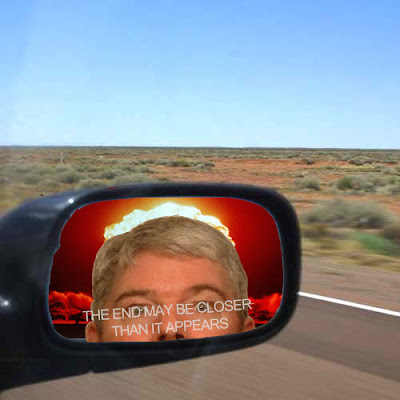 So much for clever me and my end of the world puns.

I started down this dead end road to Apocalypse last week watching a program on the History Channel about all these various sources predicting the end of the world coming in 2012 (Dec. 21, 2012 to be precise). They cited the Mayan Calendar as one of the key predictor of this date, followed by the Book of Revelations, Nostradamus and finally a Web Bot.

As with any dire predictions of doom and gloom, you have to sift through some of the generous assumptions used to arrive at 2012 as the end of days. The Mayans didn't actually predict the world would end in 2012. Their calendar just ends then. Personally, I think the guy chiseling the calendar ran out of stone and figured he wouldn't be around in 2012 anyway so what the hey.

Revelations and Nostradamus pretty much predict every year as the end of the world. The real stretch is the Web Bot that searches the World Wide Web looking for key words that define the mood of people around the world and draws conclusions. The search engine was originally designed to help make stock picks. Instead, it ended up predicting 9-11. Well, it didn't actually pinpoint 9-11. It just said something bad was going to happen in a three-month period that happened to include 9-11.

Something bad pretty much happens in any given three month period, so I'm thinking the Web Bot is a load of crap as credible as Nostradamus.

There are other urban end of the world myths floating around out there. The Web is ripe as a dead opossum in your crawl space with end of the world theories. Some say the sun is dying and we'll all be mega tanned with a solar flare in 2012. Others predict a super atom splitter being constructed by rogue physicists will rip a hole in the space time continuum and end it all.

The irony of it all is that we all will die eventually anyway. What is the point in conjecturing whether or not it will be a collective ending or an individual one? Oh, I suppose the rapture freaks who believe Jesus is coming to whisk away the righteous think it is our souls that are at stake at the end of days. One can only hope that when they walk into the light they discover it is the high beams of a fully loaded semi.


Meanwhile, if the world really is ending on 2012, I'm not going to worry about investing for the long term or global warming. I'm going live as if there is no tomorrow. Shoot maybe I'll even stop mowing my lawn and making my bed.

Did they give a date in December when this will happen because I'm thinking if I put all my Christmas presents on credit, at least I will never have to pay for them? However if the end is nigh before the 25th that lets me out of Christmas shopping altogether and I'm pretty happy about that :)

December 21, 2012 is the date being bantered about. So I guess you don't have to buy presents that year. It would be a good time to be on a cruise. Wouldn't have to worry about eating or dringing too much then :)

I doubt your wife will buy it either (but I could see my husband giving that a try too!)

These "theories" blow my mind.

I read that the recently discovered "Planet X" or also known as Nibiru by the ancient Sumerians, is supposed to wreak havok with the Earth's axis on it's orbital pass in 2012. Hmmmmm....

These types of predictions have always plagued us. I remember that the world was supposed to end in 1987, 1999, and 2000 (for various reasons). I think it's in human nature (or the human nature of religious freaks) to believe that the world is always about to end. People want to believe that they are on the cusp of something supremely important or catastrophic; that God has chosen their generation to end it all. It makes them feel less insignificant. Every generation predicts the end during their lifetime. This is just the latest.

I knew a guy that was sure there would be a major cataclysm at midnight at the turn of the century to year 2000. He took two weeks vacation and scuttled into his home bunker to pray with his family. He looked so disappointed when he returned to work after nothing happened, especially since the rest of us sinners had major hangovers.

I know that guy. He goes to my church.