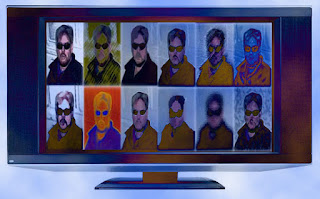 , I am still fascinated by the mystical side of this branch of the sciences. It's why every now and then I write about the "many-worlds" theory that poses the possibility that there exist an infinite number of parallel universes in which every possible outcome at any given moment takes place. So reality as we know it in our universe only exists when we actualize it by observing it or participating in it.

I'm sure that this is an oversimplification, but for the purposes of a blog called Dizgraceland, I think it is adequate. Anyway, as I was standing waiting for the train the other morning I was thinking about how many channels of television I have on my FIOS network at home. When you combine the hundreds of networks offering hundreds of shows with the thousands of options available "On Demand" you have a pretty fair microcosm of the  "many-worlds" theory.

Think of it. We have created this electronic model of infinite universes that coexist constantly broadcasting scenarios that aren't really actualized in our world until we click on that channel. We become the godhead of our digital universe, clicking our way through the maze of channels, creating our reality, at least for the time we're in front of the television.

As I reflect on the many-worlds concept, I begin to understand how people can believe in the power of thinking or prayer or simply focusing on a goal. Because if all possibilities exist at any given moment, then you are highly more likely to achieve the one you want if you set your sights on it. Too often, however, we think of what we want and then start making lists of all of the possible obstacles that will prevent us from getting it. So instead of actualizing our ideal outcome, we randomize the realities, stacking the deck with many more negative outcomes than positive ones.

This model lives in my Quantum Physics television network analogy as well. If we randomly click through the channels, chances are 99 percent of what we see will suck. But if we use the channel guide and our DVRs, we can maximize our chances of watching something we like. We are "channeling" our realities into the direction we choose. It is your TV Guide to enlightenment so to speak.

Stop, I am killing me.

But semi-seriously, I like the idea that we can control some of the randomness of existence by choosing our path. And I'm not suggesting that you rigidly define from start to finish how your life should go. I personally have chosen a rather meandering path. But I do think this theory gives us the opportunity to choose positive paths and leave the negative ones to our infinite number of other selfs floundering around in the infinite number of other worlds or universes.
Posted by Time at 8:56 AM

You took the words right out of my mouth... fancy that! Well said.

Thanks Kyle. Now if I could only practice what I preach.

In all fairness, embracing the randomness of a quantum system is a pretty hard thing to practice. Making yourself aware of the possibilities and acknowledging them? That's miles ahead of most. Thumbs up! :)