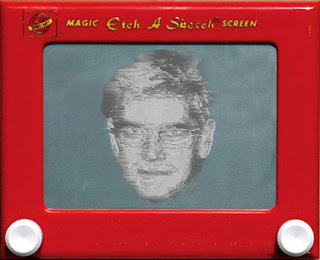 Tabula Rasa  (Latin for "blank slate") is the theory that we are born with a brain not unlike the scarecrow in Wizard of Oz and we immediately begin to fill it up through experience and perception. The theory was embraced by such noted figures out of history as philosopher John Locke and psychologist Sigmund Freud.  The primary premise being that we are shaped by our environment.

I can't totally buy into this theory. If that were truly the case, wouldn't all siblings from a family essentially evolve the same? And we all know that isn't the case. I am nothing like either of my brothers (thank whatever power that is). Though both of them would greatly benefit by being more like me. Lord knows the world could use a few less right-wing Republican Christians.

Anyway, I reject the blank slate theory because common sense tells me that mankind could not have progressed as far as we have without some sort of collective consciousness to tap into so that we can build on existing knowledge rather than simply absorb it.  The concept of Tabula Rasa also would suggest we are all born with a level playing field when it comes to the brain and what separates us is not our capacity to learn but on what we are exposed to.

Nothing about the blank slate concept seems to account for differences in IQ. Was their anything about Einstein's environment that shaped his genius? He flunked out of math and worked as a Patent Clerk before developing the Theory of Relativity. How can you ignore that there had to be something programmed in his DNA that allowed him to tap into a greater knowledge pool than most people are capable of diving into. I seriously doubt if the only thing that allowed him to be a genius was absorbing more knowledge from his environment than other people (unless he had really, really blank slate to draw on).

Of course, I may be oversimplifying the whole Tabula Rasa thing. And I don't discount the role of environment in shaping us. I just think something has to be there to begin with other than a blank slate. I lean towards the concept of soul progression drawn from Buddhist thought. I think we are more like a Etch-A-Sketch at birth than a blank slate. And every new lifetime, we get shaken up before a new personality is drawn on our personae. And the older our soul is, the more difficult it is to ignore the lines of our former selfs that are still etched on the screen.

I could ramble on, but I'm drawing a blank.

tabula rasa = phooey
case in point: our young and, I think, mentally challenged farm worker spends an hour every noon in contact with a very liberal witch and he still thinks Sarah Palin rocks the universe. Obviously nothing in THIS environment has soaked in. His brain cannot engage on that level.

Oh and the Etch-a-Sketch analogy is pure perfection.

Clara my liberal witch friend,
Some would probably say your young farm worker's brain is half empty for admiring Sarah Palin. I would suggest that his brain is half full (of it) :)

Oh and I'm glad you liked the Etch-A-Sketch analogy. I Googled it and I do believe I am the first person to coin the phrase Etch-A-Sketch Rasa. This is a major milestone for me. I've finally said something semi-original.

I guess I came to this party a little late, but I'd like to add that the universal mind theory greatly influences my opinion on the matter of a blank slate being impossible. It just isn't possible if everyone and everything is eternal and part of the whole, am I right? :) Debatable I guess, but it makes sense for me. Great post!

Kyle, It's never too late to come to the party as long as you bring more beer :)

And if you believe everything is connected in some way (and I do) then yes, the blank slate theory is impossible.