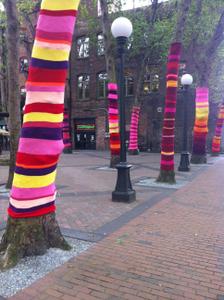 I was walking through Pioneer Square at noon trying to dodge the packs of tourists following their Underground Tour guide lemming like, listening raptly to worn jokes about the Seattle fire and the rebuilding of the city back in 1889. Although Pioneer Square is probably my favorite part of the city, I couldn't help but feel slightly annoyed at commercialization of the area (even though the tourists are probably the only thing other than the bars keeping the neighborhood alive).

I was also annoyed that Occidental Park had suffered the indignity of a public art project. A large portion of the trees in the park as well as light poles had been victim of something called a "yarn bombing." An artist was paid essentially to install yarn graffiti in one of the oldest downtown parks. Occidental Park had already been vandalized by the city a few years ago when the replaced the original cobblestones with smooth, modern pavers to avoid tourist tripping and suing the city.

When I first moved to Seattle in 1980 to go to college I walked down First Hill from Seattle University and ventured into Pioneer Square on a Sunday morning.  Having grown up in Boise, I had never really been exposed to a big city. As I made my way along First Avenue I noticed a very old and very drunk man propped up in a doorway in a puddle of urine. As I stared at him with my naive country boy eyes, he looked up, grinned and flipped me his middler finger.

The panhandlers and homeless alcoholics who used to plant themselves on every corner in Pioneer Square are now distinctly missing.  I don't know whether they've moved on because city ordinances or because of the economy. I've notice that some of them have migrated closer to the waterfront and sleep in small camps under the Viaduct.

You would think that after more than 30 years living here that I'd feel more at home in the city. But it dawned on me as I made my way up Jackson Street towards Union Station where I work that I still feel like an outsider. Maybe it is because Seattle is a waterfront city and was often the jumping off spot for people headed to someplace else. I pass the Klondike Museum on Jackson Street and it reinforces that notion. Thousands passed through the city in 1897 headed for the Yukon gold fields of Alaska. I'm sure their impression of Seattle was that it was simply a place to stock up before hitting it rich someplace else.

I moved here under the pretext of finishing college. In reality I just wanted to get out of Boise and be somewhere near the water. In hindsight I should have fulfilled that need to be near water by moving to a warmer clime such as California or Florida. Instead I chose the place that was about as far north as you can get in the United States without being in Alaska.

Don't get me wrong, it is a beautiful city, but it always seems a bit off somehow. It is hard to deny that some of the worst serial killers in history called Seattle their home at one time (namely Ted Bundy and Green River Killer Gary Ridgeway). Maybe it is the rain. The sky is the bluest blue here in Seattle only when the clouds part.

And it's not that I feel any more at home in Boise where I grew up. I've now lived in Seattle longer than I did in Boise. I go back there and I'm a stranger. But here, I still feel more or less like a squatter.

Maybe it is in my genes. In my forays into the family tree, I discovered a long line of farmworkers and day laborers migrating west from West Virginia, Ohio, Kansas, and Iowa. Many made it as far west as Oregon and Washington only to drift back eastward  to Idaho.

Sometimes I think about what it would be like to move elsewhere. Where would I live if I could live anywhere? I never really come up with an answer. Part of it is because my imagination can never quite get past the reality of finite resources. It doesn't do any good to fantasize about living in exotic places because where ever you live you have to have money (at least in my world).  I've never been one of those people who just pick up and move and worry about how you'll make a living once you get there. This is especially true now that I have a family.

I'm not sure what the point of this post was. It started out as a vague rant about tourists and yarn bombing and meandered down the melancholy path of wondering why I'm still in Seattle. But I suppose in the scheme of things there doesn't have to be a point any more than there has to be a reason I'm here in Seattle. When it comes down to it, where ever you end up is where you are.

Just trawled back to find this post - how's that for a memory? I wanted to show someone the photo and I was certain it was your blog!

Your memory is much better than mine. I don't even remember posting the photo. :(

I am the 'someone' Helen wanted to show this to because the same thing has happened in Santa Cruz de Tenerife, where I live. I kind of like the idea - it puts a smile on people's faces and there can never be too many smiles.

Yes, the purpose of art is to evoke an emotional response. Last I walked through Occidental Park, the trees were bare. I will let them know their sweaters ended up in Santa Cruz de Tenerife. :)