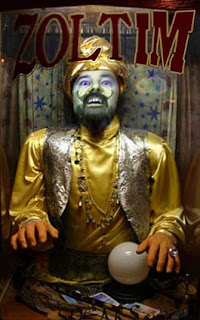 Non-deterministic causality thoughts is a pompous way of saying, "random thoughts." I borrowed it from some physicists. Apparently, since they deal in complex mathematical formulas much of the time, they believe their language should reflect their reality and be basically incomprehensible to the average person.

But I could wax poetic (which has nothing to do with actual wax but rather means to "grow" poetic..."wax" being the opposite of "wane") about the language of quantum physics for hours. I really started out to write about randomness. It is something that fosters a great deal of debate in the physicists' and the metaphysicists' world(s). The debate centers around whether it is even possible for something to happen randomly because everything appears to be caused by something else. Even random number generators depend upon a mathematical calculation to generate the numbers so they actually aren't random.

The hang up in all this is the concept of free will. If everything is predetermined or caused by something that came before it, then you could argue that even when you are fooling yourself into thinking you are acting on free will your actions were actually based on tons of stuff that came before your action (i.e. I choose to pull into the 7-11 for a Big Gulp out of free will and not because I just ran a mile on the treadmill and had a bag of pretzels which I found wedged in between the seats by my three-year old).

The big QUESTION in the theory that everything is caused by something else is is what was the first thing that set the whole predetermined farce in motion in the first place?  The religious would adamantly suggest god. But then I would have to ask (as I did in Sunday School) who or what created god?

I tend to believe that we are who we are based on who we have been and what we've done. So in that sense, everything is predetermined. But it is a predetermination somewhat of our own creation. It boils down to choices. Every choice you make determines the next juncture of your life. And every choice was created by the one before it. We are essentially rats building our maze while looking for the cheese we planted at the end of it.

That was pretty random. I wonder where that thought came from?
Posted by Time at 9:48 AM

You just got kilgore Trout crashing on your couch.
Try bark a blog them too

Let me check. Nope, but Kurt Vonnegut is sitting there...wait, no that's a cat bed.