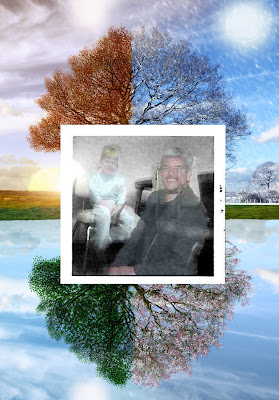 The rains have begun. I say this as if I were living in the tropics and monsoon season was beginning. Actually it is just fall in the Pacific Northwest. And saying the rains have begun here is a bit redundant.

Regardless, I sit at the window on my morning commute staring at the gray shore merge with the gray water and the gray sky. If you throw my gray hair into the mix, it can be a bit depressing.

Not that I intended to post about the weather. I despise conversations about the weather the way I despise inane comments to me from my neighbors, such as, "Washing you car?" when I'm standing there with a hose, bucket, soap and a sponge in front of my car. I am tempted to reply, "No, just about to have a sponge bath, care to join me?"

Small talk has never been my forte.

Regardless of the rain, the calendar still tells me that it is fall. And before I know it, it will be winter and another year will be tossed into the recycling bin along with the Christmas wrap. I swear time moves so much quicker than it did when I was a kid. Then a summer day lasted a week and Christmas was always agonizing months away. I looked forward to birthdays, too. And I always wished that time would move quicker so that I could grow up.

Be careful what you wish for.

I could spout platitudes about "being as young as you feel," but I am reminded too often that you are "as old as you look." And  besides, after working in the garden pulling more ivy vines and filling up mountain beaver holes (yes, the little bastard has reemerged), I feel pretty old...physically anyway. My mind still wanders along clicking a stick against a fence and picking up leaves.

My 86-year old  mother tells me she doesn't recognize herself in the mirror. I know how she feels. I feel that way when I look at my hands as well.

I'm sure I've blogged about this before. That is another sign of aging...repeating yourself and forgetting that you are doing so. Forgetting in general is another problem. A couple nights ago I was watching an Adam Sandler film called Just Go with It  that co-starred Jennifer Aniston. Out of the blue Nicole Kidman made an appearance in the film. And for the life of me, I couldn't remember her name. I pictured all the films I'd seen her in, but I couldn't recall her name. I figured it would come to me. But the next morning, I still couldn't remember her name. I finally had to Google Moulin Rouge and read her name in the film credits.

I realize not remembering Nicole Kidman's name isn't a big thing (unless you are Keith Urban). But as bad as physically aging is, losing my mental faculties would be a major bummer.

Perhaps all of this is why I lean toward wanting to believe in some form of the Buddhist concept of spiritual rebirth. At least after a hard winter, I can always look forward to the promise of spring.

I spent one week in Tacoma and discovered that I could never live there. It poured rain the entire time and the soldiers at Fort Lewis finally took pity on a stupid Montana girl without an umbrella and stopped making me wait in line so long to get on base (it was right after 9/11 and I was visiting my daughter, who had just had a baby at the base hospital). I was so claustrophobic that I felt like I couldn't breathe until I had crossed the mountains back over to Ellensburg. My daughter was playing a Jewel cd as we drove out of Tacoma and I snapped at her to get it out of there before I drove the car off a bridge and killed us. So depressing. I know people love it, but not me.

There are many reason besides the rain not to like Tacoma. Be grateful you didn't visit when the pulp mill was still in operation and the aroma that Tacoma was famous for still permeated the air.

I can forgive the rain for the opportunity to live near the water. I spent too many years surrounded by the sagebrush deserts around Boise. My Pisce's self needs to be near water and liberal politics.