No cliff references and other resolutions 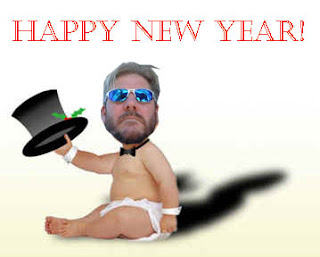 There is nothing like the threat of economic ruin to ring in the new year.

I find it very sad that the stock market sheep continue to fall for the brinkmanship in Washington D.C. The fiscal cliff was a bit like the Mayan End of the World without the parties.  But if they had hyped up fiscal cliff parties, they could have created a drinking game where you got to down a shot every time someone said "fiscal cliff," and there would be one heck of a lot of drunk frat boys making late night calls sobbing into the phone, "I lub youse guys" to their Senate and Congress people.

But I, like every other average Joe Bag of Doughnuts didn't really understand the importance of anything either the Republicans or Democrats were arguing about despite the mass media experts explaining it to me ad nauseum. I just know that every time the federal government is about to go belly up, they borrow more of the imaginary money to increase the national debt beyond the comprehension of anyone. It makes you wonder why all the world leaders don't just give every country a "get out of debt" free card and start over with no one owing anyone anything.

I was never very good at economics.

Regardless, it is the year 2013 and we have four more years until another presidential election and the Olympics. So that is something. I am a bit surprised that no one has made a big deal over the unlucky 13 in year 2013. I am sure that if 2013 has any of your average natural disasters, it will be blamed in retrospect on the number 13 (unless someone unearths an Aztec calendar that is missing a few pages).

I spent New Year's Day dragging our no longer "live" Christmas tree out into the yard and dismembering its corpse. This is not something I am proud of.  I much prefer simply disassembling an artificial tree and putting it back in a box as I did the previous day with my Elvis Tree.

As in other years with less ominous unlucky numbers, I have made no resolutions. At my age, I have pretty much accepted all of my faults and imperfections and see no reason to resolve to do anything about any of them.  Though I would find it refreshing to make resolutions like "I resolve to start smoking, eat whatever I want, drink like a fish and stop bathing altogether."

As it is, I simply settle for getting out of bed every day and getting the highest possible score I can in Angry Birds. I believe in setting the bar low enough to step over without breathing heavily.
Posted by Time at 9:53 AM

OK so 13 might be unlucky, but why 2013? They are only numbers and unless it occurs on a Friday, I don't mind sharing my life with the odd 13.

The great (and awful) thing about the internet is how it bridges oceans. At Christmas I heard that a cousin had passed away. Maureen had moved to America over 40 years ago and although my parents had met her on their travels, I hadn't.

A few moments on Google led me to her obituary in a paper published in Arizona. I remember her (or recall her photo from my Christening) wearing a mini-skirt and a back-combed bob.

Somehow she'd become a lady in her sixties wearing a wig. She was a member of her Bridge club and ranked highly. She left a husband, but no children.

It's a new year, that we are here - fiscally challenged or not - is good.

Once again I must point out that, in America, we are quite adept at finding the unlucky in just about anything if we think about it long enough. What makes 2013 really ominous is that 20 minus 13 equals 7. Numbers don't lie.

Sorry about your cousin.

"I resolve to start smoking, eat whatever I want, drink like a fish and stop bathing altogether."


I resolved to do all of those things several years ago...it was the best year of my life.

Here's wishing you and yours a prosperous new year.

Mickey, I admire your resolve. Wait, that's a rug cleaner isn't it? I wish you a prosperous new year as well.