Ladies and gentlemen, the Elvis tree is still in the building 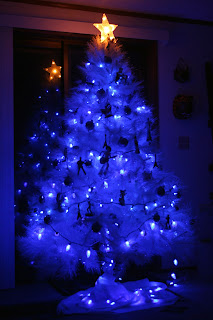 I honestly couldn't tell you any more when the Elvis tree began. I can tell you that I bought the white, artificial tree from K-Mart (which seems pretty appropriate). And many of the ornaments came from uncontrolled buying binges on eBay. But I can't pinpoint when the tree took root.

I suppose it began as a rebellion against mainstream conventions associated with decorating for Christmas. And it was fed by the convenient aspect of combining my unexplained obsession with collecting Elvis crap with decorating a tree.

Now that I have a family, I have bowed to conventional decorations on one level of our house, but I have held onto the tradition of constructing and decorating the Elvis tree. My toddler children so far find it fascinating and spend a great deal of time pushing the buttons on the musical Elvis ornaments for abbreviated versions of Blue Christmas, Here comes Santa Claus and I'll be home for Christmas. I have forgone my tradition of placing a model of Graceland under the tree until my kids are old enough to resist the urge to touch it.

Some things are just sacred and Graceland is one of them.

But I do sense my four year old daughter beginning to wonder what the whole Elvis tree is all about. A few nights ago, she was playing in the room where it shone it all its blue splendor. An Elvis Christmas CD was playing on the DVD player. Suddenly my daughter got this very thoughtful, serious look on her beautiful little face. Then she turned to me and asked, "Papa, why do you have all of this Elvis stuff."

I got the same feeling I imagine the Grinch had when Cindy Lou Who confronted him and asked why he was shoving the Christmas tree up the chimney. I stammered something about just collecting Elvis stuff over the years. She nodded her head and replied, "I like Elvis music. He sings handsome." Then she resumed playing.

So I dodged that bullet, but I don't imagine there will be too many more Christmases left that I can put up the Elvis tree in peace without explaining to my kids why.

The problem is, I don't have an answer. I've always kind of looked at the tree as a lark. It's like this perpetual art project that represents everything good and bad about our culture. And regardless of any deep philosophical or psychological reason for it, I just think it's pretty.

But I suppose I'd better start working on a better answer.
Posted by Time at 9:47 AM

"Just cuz," seems like a perfectly reasonable answer to me! And one kids can accept, I've found, at pretty much any age. If you like it (and it's not hurting anyone), go for it.

"Just cuz," seems like a perfectly reasonable answer to me! And one kids can accept, I've found, at pretty much any age. If you like it (and it's not hurting anyone), go for it.