In the nickname of time

Etymology of the "nickname": The compound word ekename, literally meaning "additional name", was attested as early as 1303. This word was derived from the Old English phrase eaca "an increase", related to eacian "to increase". By the fifteenth century, the misdivision of the syllables of the phrase "an ekename" led to its reanalysis as "a nekename". Though the spelling has changed, the pronunciation and meaning of the word have remained relatively stable ever since.


I have always had a nasty habit of giving people, even complete strangers, nicknames. Perhaps it is because my  legal name -- Tim -- is a nickname for Timothy. Ironically, many people call me Timothy thinking that is what my name should be.

Although I do give friends and family endearing nicknames, I have less than flattering names for strangers I see on a regular basis, say at the train station or on board the trains I ride every day to and from work. It is kind of a perverse hobby I have to pass the time while waiting for the train.

For example, there are a group of cackling women who walk their yapping little dogs along the train platform on a regular basis. I have nicknamed them the Haggis Sisters. They started out as the Harpy Sisters, but I kind of like the play on words of Haggis. There is also a man who shuffles by the station in a jogging suit on a semi-regular basis that I call Freddy the Fart.

I have nicknames for my fellow passengers as well. Since I am a creature of habit, I stand in the same spot at the platform everyday. It is precisely where the train door will be for the first car when the train pulls into the station. I am generally the first person there and I guard my spot very jealously because I like to be the first person through the door when it opens so that I can get my usual seat on the water side of the tracks. So I really get pissy when other people arrive late and try to crowd my spot. The three worst offenders are Lennie (a hulking man who invades my personal space and reminds me of the slow character in Steinbeck's Of Mice and Men), Thumper ( a man who reads the Bible while waiting for the train) and A-hole (another guy who invades my personal space and races me for the door when it opens).

In the afternoon commute there is Phlegm, an annoying potbellied loud mouth who is constantly making disgusting sounds in between moronic pronouncements. And then there is Pepe Le Pew, a large man with questionable hygiene habits who gets pretty ripe when it warms up on the train.

Not all my nicknames are for fellow commuters. There is One-Note Johnny, the lousy saxophone player who plays the same song day after day in the plaza outside my office window. And there is Perry the Poser who works out in my downtown gym and never loses sight of himself in the mirrored walls around the weight room. Let's not forget Chia Pet, a woman with an unfortunate hair style who also works out at the same gym.

I think I would have made a great mafia don, what with my affinity for giving people nicknames.

Yet another opinion about opinions

I write a lot about opinions. More precisely, I write about people not drawing a distinction between an opinion and fact. Because nothing sets me off more than someone making a declaration about something they know nothing about and stating it as Gospel.

So it was with great pleasure that I read Seth Godin's blog post "Is everyone entitled to their opinion?" Godin is a best-selling author who writes about marketing in a very refreshing way. Anyway, Godin says there are two things that disqualify someone from being listened to: Lack of standing and no credibility. If someone has no influence over your work (i.e. they aren't a respected art critic or a frequent purchaser of art) it is okay to ignore their opinion if they diss on your art. And ditto if their opinion isn't based on experience or expertise.

Amen. Finally someone has pointed out that just because you have an opinion it doesn't mean it matters. It is one of the problem with many people's interpretation of democracy. They think it means that everyone's opinion is equal and needs to be listened to. Wrong. It means the majority of the people with same opinion get to give the finger to the minority (at least on any given election day) that have a different opinion.

Now I don't think Godin was really talking about democracy in his blog post. He was determining whose opinion matters in relation to the product you are marketing. He uses an example of someone in Accounts Payable hating the company's new logo.Godin says if you are the person responsible for that logo you should (and must) ignore that opinion. That person isn't the target market for the logo.

At one level, Godin is trying to encourage people to do great work without worrying about the negative reaction from people who don't matter. After all, you can't please everyone, so you might as well please the ones writing the checks.

In a kind of related topic, I went with my family to see a Gauguin exhibit at the Seattle Art Museum last weekend. I was kind of stoked because I had a somewhat limited and romanticized view of Gauguin. I knew he had hung out a bit with Van Gogh. And I knew he had ran off to Tahiti to paint.

As we moved around the gallery with the hordes of other art lovers with our audio tour devices I quickly discovered that Gauguin wasn't the romanticized character I'd pictured him as. He'd gone to Tahiti in an effort to produce enough commercial art that would appeal to the Paris market and keep him from having to get a real job. And since Tahiti was the paradise he'd envisioned (it was actually quite up tight due to the influence of religious missionaries) he made up stuff to paint and copied picture post cards he bought.

And in my opinion, his art kind of sucked. It seemed crude and contrived.

But my opinion doesn't matter. For one, Gauguin is dead and is beyond caring what I think, and his art is worth millions despite my opinion of it.  Now if I was a mult-millionaire and donated large sums of money to the Seattle Art Museum, they might care that I don't like Gauguin's art. But because I am merely a dues paying member of the museum, my opinion only merits a blank stare and a call to security to "watch this guy."

In conclusion, I just want to say, "Bless you Seth Godin." Because the next time someone offers me their opinion and they have no standing in my universe or credibility, I am at liberty to say, "No thanks, I already have one."

A chip off the old writer's block 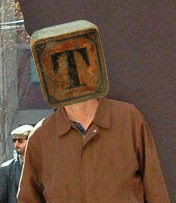 Having been a blogger since August 2004, an aspiring writer since junior high and a professional writer (in theory)  since I graduated from college, you would think that writer's block would not be an issue, especially for someone who could basically give you a thousand words about whale vomit without blinking. But you know, sometimes you just don't have anything to say.

This, of course, doesn't apply to my three year old son who always seems to have something to say. Just none of it makes  sense to anyone but him. But he states everything with a great deal of authority, so I believe he will be very successful someday.

I'm not so sure I am really suffering from writer's block as much as a lack of time and inspiration. I traveled more in the last month or so then I have in quite some time and I don't really blog when I travel anymore. It just alerts everyone that you aren't home (not a good idea from a home security standpoint) and frankly, when I am in my hotel room I'm pretty much occupied flipping through channels looking for episodes of Doomsday Hoarders and I don't have time to blog.

I think part of my problem is also being self conscious that I am approaching my 1000th blog post and feeling pressure to produce something really great to mark that auspicious occasion. I'm sure a thousand blog posts seems nothing to my fellow blogger Baggy who seems to crank out a thousand posts a week. But it seems like a pretty big number to me.

Not that everyone of my posts has been the most awe inspiring prose mind you.  I evolved like everyone who has blogged for some time has. You go through phases in the beginning of trying to hard, or posting mundane stuff (not unlike Facebook status reports). And if you get people following and commenting on your posts, you can fall into the trap of writing crap you think they'll want to read. But the best blog posts are those where you just forget anyone might be reading and write for yourself.

And that is usually the only person who is reading it anyway.  I have written some many random posts that I honestly forget writing some of them and read them with rapt interest when I stumble onto them in my archives. At times it is almost as if someone else wrote them. And if you subscribe to some of my drivel about space time continuum and multiple universes, maybe some one of my other selves did.

Since I missed my goal of blogging my 1000th post on February 29, I am now going to shoot for August 4, 2012 to coincide with my blogger anniversary. That shouldn't be too hard to accomplish. Of course I'll have to think of something to write.