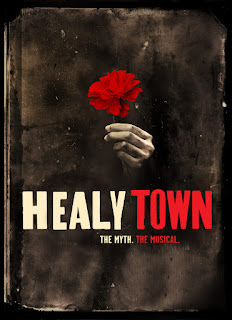 My wife and I took our daughter to see a performance of Hades Town at the Paramount Theater in downtown Seattle last Saturday. It was the first major performance I've seen since the pandemic. And I have to say it was one hell of a show.

The place was packed and while most people wore masks, it was kind of freaky being in a crowd. COVID has made me hyperaware of things like that. Not that I've ever liked crowds. But I never used to worry about crowds of people making me sick.

It is amazing how the pandemic changed our lives. And it is amazing how we've changed how we respond to it. In the beginning we were washing our hands several times a day and using hand sanitizer like it was holy water protecting us from the devil. Masks went from a novelty to a necessity. And god forbid we were ever within six feet of another person. Gone was shaking hands and hugging.

But now no one cares about hand sanitizer, social distancing and for the most part masks. Even so, reports are increasing of yet another surge in COVID cases and health officials telling us we should wear masks and avoid crowds. No one really listens.

I enjoyed Hadestown immensely. But that night we got a message that they cancelled the evening performance due to illness and COVID affecting the cast. I was a bit surprised though the understudy had been playing the role of Orpheus in the show we saw. So I wonder who else got sick between the matinee and the evening performance.

In case you've never heard of Hadestown, it is a musical based loosely on the Greek myth of Orpheus travelling to the underworld to bring back his wife Eurydice. Spoiler alert: he fails. The music from Hadestown is amazing. The audience gave the show a major standing ovation (not always a given in Seattle). And it was well deserved. I highly recommend you catch a show if you can. Or at least listen to the soundtrack. It is pretty haunting. 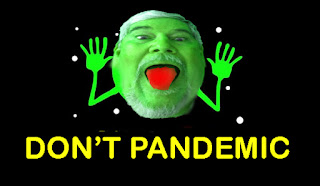 I thought I was yet again being too clever by half when I thought of turning Douglas Adam's "Don't Panic" from Hitchhiker's Guide to the Galaxy into "Don't Pandemic." But of course, Google showed me I wasn't the first clever person to use the phrase. And ironically I was looking over some of my past posts and discovered I'd titled post "Don't Pandemic" earlier in the pandemic. Once again I am repeating myself without being aware of it.

But this time I put my face on the "Don't Pandemic" character so at least that is something original.

I don't know what to think about the pandemic now. After about two years of hourly headlines describing the onslaught of new variants sweeping through the world Covid has been pushed to page five of the virtual news pages behind classified ads for lost pets. Occasionally a click bait headline pops up promising that Covid isn't dead yet and the next one is going to be the mother of all strains that will wag it's behind at your boosters.

But the price of gas and groceries seems to be more frightening.

Now that my kids are out of school for the summer and I no longer have to shuttle them to and from school and play practice, I have returned to the office several days a week. I have to tell you, it actually feels pretty good to ride the train to work again and sit at a desk that isn't in a basement surrounded by boxes, dog beds and meowing cats.

And being in downtown Seattle isn't as scary as I thought it would be. Now granted I am exposed to a narrow part of downtown each day. I have a two minute walk from the train station to my office building and I don't venture out much. Me and the pigeons are above it all on the fourth floor of my building. And next month I move to the 11th floor of another building. I will be in a much smaller interior office so I'll be even more insulated from the real world.

Although I wear a mask on the train, very few people seem to care anymore. The train isn't full, but it rarely was before the pandemic. I also don't wear a mask in the office. There are only a hand full of people here. It is kind of nice.

Most of my meetings are still virtual. That is also nice. The only difference from remote is that I am wearing slacks and a dress shirt instead of pajama bottoms and a t-shirt. I also don't have a dog scratching at my leg for attention.

It's almost like the world is back to normal for me.