As I mentioned, I have walked every day for exercise during the pandemic. I have walked ad nauseum. I try to change routes daily so I don't get too bored. I generally walk in two-mile segments. I have a Fitbit to keep track of the steps. I've walked miles and miles.

I walked by the Edmonds Cemetery yesterday. I've walked an driven by it hundreds of times. And I've even noticed this sign before. But this time it struck me as funny. We always seem to be looking for our niche to fill. This helped me put it in context. Maybe it is better to be a generalist than to fill this niche. 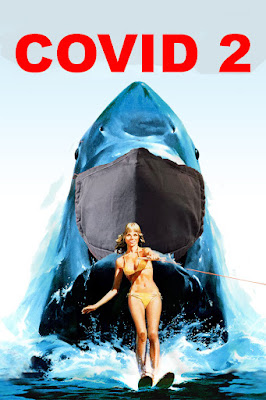 Just when you think you are safe, they bring you
COVID Variants.
Don't go near your unvaccinated neighbor.

It is all like a bad movie sequel that you don't really want to watch. After all you were glad the first one ended. But the monster keeps coming back to life and chases the hero or heroine. But in this case, the good guys wear masks.

When we were all fully vaccinated, we were briefly relieved. I stopped wearing masks in most places. Tess booked a trip to Disneyland and Universal Studios. It was like we were finally waking up from the nightmare.

And then the Delta Variant reared it's ugly viral head. Good news was it was hitting the unvaccinated the hardest. My first thought was serves them right. Then they started speculating the fully vaccinated were getting sick, too. Just not as sick.

We went on our trip to Disneyland anyway. It was supposedly operating at reduced capacity, but you could have fooled me. They required masks inside on rides, but most of the time you were jammed next to thousands of people without masks.  We were staying at the Disneyland Hotel and they used COVID as an excuse for not cleaning the rooms every day.

We came home from the vacation more stressed than when we left.

We'd started dining inside our favorite restaurant. We could see the servers' faces for the first time. That quickly changed. We are now back on the patio and servers are masked again.

I was supposed to return to my downtown office three days a week beginning September 7. That has been moved to November 1 at the earliest. My work is now requiring everyone to be fully vaccinated as a condition of employment. I am glad. People shouldn't have a choice when it comes to keeping the damned virus from spreading and mutating.

Now they are talking about booster shots for everyone. My wife and I have already had one because of various health reasons. But part of me wonders if it is enough.

I tell you I am sick of masks. I'll wear them, but the novelty has worn off. The brief time when the vaccinated could be free of them was too much of a tease. I want to be free of this all.

Oh well. Once more into the breach. 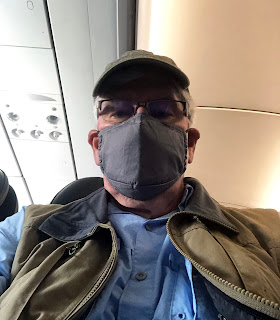 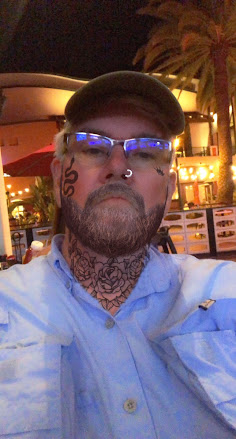 I watched a documentary on Amazon Prime the other day about the actor Val Kilmer. It was created using lots of random footage actually filmed by the actor over his life. First with film cameras and later with video, many from the sets of movies he was starring in.

So why would I watch a documentary about Val Kilmer? We kind of have some things in common. He is about the same age as me. We were both raised Christian Scientists. We both have one son and a daughter. We were both wildly successful in our careers and became quite famous....well, he did. I really thought he played an amazing Jim Morrison in the Doors movie and I will never forget his Doc Holiday in Tombstone.

Oh, and my wife took my children to see his one man performance of Mark Twain several years back.

What struck me most about the documentary of Val Kilmer was how he no longer resembles the Val Kilmer I remember from all of his films. He has had throat cancer and had his trachea removed. He no longer acts. He attends comic conventions and signs autographs. He does art.

I was also amazed that he was able to capture so much of his own life on film. I have absolutely no film or video of my life prior to my late 20s and then very little. You would be hard pressed to make a documentary about my life. But that is also what struck me so hard. There would be nothing to make a documentary of my life about. I've never been famous. No one would care.

That in itself is depressing. But I try and comfort myself with the knowledge that, although I didn't achieve fame in my life, I also didn't lose it. No one watches movies I've made and then gasps at what I look like now in my 60s. I've also had a relatively healthy life.

But still, I never starred in a movie. I never published a book. No one recognizes me on the street. No one even really sees me. And when I die, very few people will remember me or for very long.

Now granted, I could live another 20-30 years. I could still write a book. But writing a book isn't what it used to be. Pretty much anyone can these days.

I used to naively believe my blog was my road to fame. I thought I'd be discovered and my genius recognized. But a couple of decades go by and you realize that isn't going to happen.

Part of it is age. It isn't a world for old people. No one wants to hear our stories. They aren't relevant anymore. Layer COVID over everything and my opportunities for being famous are pretty much nil.

Oh well. It's time to blow out the candles on this pity party's cake and get on with life. At least I still have a sense of humor. 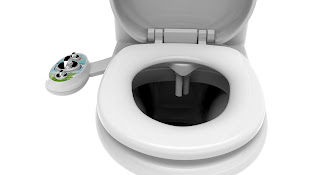 I honestly had never used a bidet until we stayed at an AirBNB cabin a few months ago that had a bidet attachment installed. It was a fancy electronic one that allowed you to pick a water temperature. I was skeptical at first, but after one use I wondered how I'd ever lived without a bidet.
The pandemic inspired many shortages, including toilet paper. So a bidet naturally addresses that concern directly. The only thing you need toilet paper for after using a bidet is using a few squares to dab the water off from your tushy.
When I got home I began researching how I could install a bidet attachment in my own bathroom. I discovered there were many affordable options. I chose a model from a company called Zen. I ordered it and installed it without too much trouble.
Without getting too gross and graphic, this is the only toilet I will use now. We've gone camping and then on a trip to Disneyland since and both times I missed my bidet dearly. You don't know how much pain toilet paper causes until you start using a bidet.
I'm flushed with pride over my discovery.
Posted by Time at 10:16 AM 2 comments: