The quote resonated with me. I have always used humor as a defense mechanism with the rationale that if I could get someone to laugh with me, they wouldn't be laughing at me. And if I could point out all of my faults before someone else could, I somehow would be ahead of the game. The problem is, no matter how many faults you point out to someone, they can always find more. And what really is the point in trashing yourself to beat someone to the punch?

Though I'm not into singing my own praises. I may be able to control insulting myself, but I can't imagine ever feeling comfortable praising myself, either. I know how I react to people who perform a contortionist act as they pat themselves on the back. So where is the happy medium?

And can I really break a pattern I've had since I was a kid? I think I learned how to be self-depreciating from my mother. She was always apologizing for the house not being clean enough, us not having enough money, our car not being as nice as other people's and for us not being of the "right" class of people. I honed in on it as a child, wondering why I never felt quite good enough.

My mother is still that way. A good percentage of any conversation I have with her is filled up with her apologizing for repeating herself, not having any interesting to say or for just being her. I kick myself (see) for not comforting her and reassuring her that she is just fine the way she is. But it has become so part of our interaction that I just sit there on the phone zoning out her chipping away at herself.

In the cockiness of my youth, I blustered about, feigning self-confidence that was often interpreted as arrogance or conceit. But so often, I felt like I was a little boy play acting at the situations I found myself in. I heard my mother repeating "you don't belong in nice restaurants...you shouldn't be in this store...you don't belong in college...our family doesn't become managers."

Not that she ever said things like that, but it is what I heard.

Now that I am middle aged, I have lost the that youthful facade that helped cushion the blows I inflicted on myself. I find myself questioning everything about me. And whereas in youth I figured time would eventually smooth out my faults and leave a polished person, I have discovered instead that time simply erodes self-delusion to a point that you must face the cold mirror and watch the future descending from the shadows behind you. 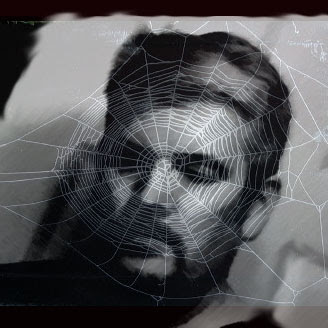 I find it ironic that I write about ghost towns in the physical and symbolic sense and don't realize I'm also writing about my own blog(s). You can practically see a tumbleweed rolling down the digital streets of my online home. So it drives home the point to me how easy it is to "fade away."
Fading away is not a new topic for me. I've written two posts in the past with that same title. It wasn't intentional. Your memory kind of fades when you do, too.

Regardless, in some circles, I would now be considered a expert on the topic of fading away. I'm pretty up on being invisible as well. I've written a couple of posts on that topic as well. Middle aged angst does that to you.

I skipped the mid-life crisis, though. It seemed too cliche. I never really had any desire to own a little red sports car anyway. In retrospect, I think I went through my mid-life crisis when I was 19 and have been emotionally aging in reverse the way that Brad Pitt is aging in reverse in his latest movie. This would explain my being a bachelor for 47 years and then becoming a family man.

I have let the cobwebs accumulate on my blogs for various reasons. The obvious has been my daddy duties. I have maybe two hours a night to do anything but play puppet, read "Wheels on the Bus" or change diapers.

The less obvious reasons for my dusty blogs are a disillusionment with Blogger.com and the challenges of dragging virtual branches over my tracks to hide my trail on the Web from unwanted eyes. My enthusiasm for blogging waned a bit when I determined I really didn't want to share all of my weaknesses, phobias and neuroses with just anybody, especially someone who is looking for them.

This greatly reduced my fodder for blog post topics. I also didn't want to succumb to the desire to write about the the economy, plane crashes in the Hudson, unemployment, how stupid Grey's Anatomy has become or how lost I am watching Lost.
You can see only having two hours of free time a night hasn't reduced my desire to watch bad television.

Anyway, I feel like I am a caretaker like my father was in my last blog post. I stop by here every few days or weeks to make sure the pipes aren't frozen and the toilets still flush. Then I check all the doors and windows and lock up. And like all of those abandoned buildings in a ghost town, my blog sits with curtains fluttering and waiting for the sounds of life to return and drive out the cobwebs.
Posted by Time at 1:29 PM 4 comments: