Seeing the light (and pulling the plug) 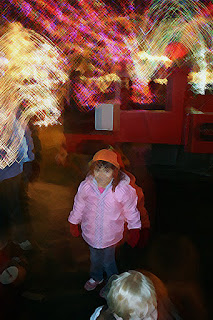 I have always liked Christmas lights. I don't really understand how they became associated with the holiday, but I enjoy them. In the past, I would enjoy them on other people's homes, but I never got inspired to put them on my own house until this year.

As with most things these days, my motivation for putting up Christmas lights on my house was for my children. I kept reminding myself of that while I was standing on top of a step ladder clinging to my gutter forcing the little light clips on at one-foot intervals. I also reminded myself of that fact when I lost all feeling in my hands and realized that, although I'd spent nearly $100 on lights,  I'd only bought enough to stretch half way across the front. And I reminded myself it was for the kids when I hopped in the car and drove to the store to buy more lights.

Every night, I'd plug the lights in wondering if I was going to get electrocuted in the rain and every night after the kids went to bed, I'd slip into the rainy, cold night and unplug the lights.

Ironically, I don't think my kids noticed the lights. What they did notice were the other houses we drove by that had elaborate light shows with dancing reindeer, sparkling snow globes and inflatable Frosty the Snowmen. Feelings of inadequacy began to seep in when I compared these mega displays with my meager strip of white icicle lights. To add insult to injury, one small two-foot section of my modest lights went out in the center of one string for no apparent reason. It all reminded me of why I had never put up lights on my house before.

It is, however, one of those things you are supposed to do.

But now Christmas is over and the lights need to come down. I wish I could get away with just leaving them up like a friend of mine does each year. When I told him I'd spent a couple of hours hanging lights he said he just went out and plugged his in. Said they were a bit faded from being out all year, but they still worked. Now granted his are the old fashioned big-bulb type. I think they are less noticeable in the daylight than the icicle variety I have that hang down. With my luck, I'd leave them out and they wouldn't work next Christmas so I'd have to replace them anyway.

Although I like Christmas lights, I will be relieved when I've tucked them into boxes with the rest of the decorations and stow them in the garage. Something happens to the magic of Christmas lights and decorations when the clock strikes midnight on December 25. They become as dismal as the piles of discarded wrapping paper from too many presents littering the floor around the Christmas tree.

On that note, my two-year old son came marching through the living room when I came home last night demanding to know where Christmas was. I told him it was over and he said that it wasn't. It was Christmas Eve and he wanted his presents back.

I feel that way about Christmas in general. I always long for the feeling of Christmas coming and dread the emptiness of it being over. Oh well, the stores have already begun swapping out Christmas crap and replacing it with Valentines crap. So I have that to look forward to.

In the meantime, it's time to get out the step ladder and pull the plug on Christmas 2010.
Posted by Time at 10:52 AM

One of our neighbors keeps their lights up and on all year long. They also have some of those solar powered lawn ornaments that light up after dusk. The lights are very tastefully done and add a bit of personality to our neighborhood.

R, So does having derelict cars up on blocks in your front yard.