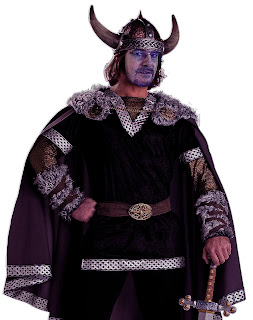 I've been watching the Viking series on the History Channel and I have to say, I'm a bit disappointed in the whole warrior image they have given the Vikings in the series. In the second episode, they sail a dragon ship west and land in England and attack a monastery where they kill most of the unarmed monks (who think the Vikings are part of the Apocalypse sent by god to punish them) and steal all of the religious artifacts. Where's the sport in that?

The thing that struck me by this dramatization was that the Vikings thought they were impressing their gods with how great of warriors they were when all they were doing was butchering peaceful monks who happily transcribing manuscripts and making wine. I have a hard time wrapping my brain around the cultural mindset that it is okay just to hop in a boat to find the nearest settlement to attack, kill and steal from.

In our society we call people who break into other peoples homes, rob and kill them thieves and murderers, not warriors. But although this is the History Channel, I imagine much license has been taken with how the Vikings are portrayed. One only has to look up Vikings on Wikipedia to discover (by sifting through some pretty dense academic text) that not much is really known about the Vikings. And they are portrayed as barbarians primarily by European Christians.

And much to my disappointment, they didn't wear helmets sporting horns. Such helmets wouldn't have worked very well in a battle and would more than likely poke one your fellow warriors eye out.

Someone should tell this to the Minnesota Vikings fans.
Posted by Time at 9:25 AM

The Vikings have invaded England? I must have missed the memo.