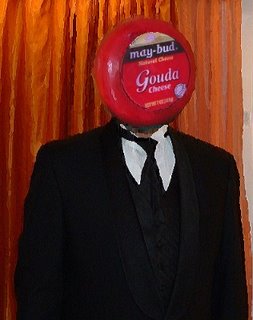 "Run, run as fast as you can. You can't catch me, I'm the Stinky Cheese Man!"

Of all the books I've read my children over the years, The Stinky Cheese Man and Other Fairly Stupid Tales has got to be the only one that has entertained me much more than it does my kids. Shoot, I'd read it even if I didn't have kids.

The book is sheer genius. For one, it makes fun of the fairy tales that we've heard ad nauseum since we were kids and two, each story is no more than a page or two long and they are funny! And believe me, when your kid asks you to just read one more story before lights out, you'll appreciate a story that is no longer than a page or two and one that makes you laugh.

The gingerbread man outruns the old woman, an old man, a pig, a cow who want to eat him, all the while taunting them with his chant about not being able to catch him. Eventually he comes to a river where a sly fox offers to carry him across on his tail. The gingerbread man trusts the fox, but half way across the river, the fox convinces him to move from his tail to his back to his nose. Then he eats the gingerbread man.

Oblivious the Stinky Cheese Man taunts a cow, and a little boy and girl convinced that they all want to catch and eat him when all they want to do is get away from his smell. He too eventually comes to a river and meets a sly fox who offers to carry him across the river on his back. Half way across the river the fox says, "What is that funky smell?" It then begins choking and coughing and the Stinky Cheese Man falls in the river and falls apart.

Okay, so my synopsis of the story isn't as funny as the actual story, but trust me, it is hilarious. The true genius of the story is that it intentionally or unintentionally is a parable about many real life Stinky Cheese Men who dash through life thinking everyone wants to cut their cheese when everyone really just wonders who cut the cheese.

At least that is my take on it. But then again, I think fart jokes are funny, too.
Posted by Time at 2:47 PM

Baggy, no offense, but you sound more and more like an American every day. :)

I had that book as a child and it was definitely my favorite. I still read it once in a while... :D GREAT book!

Baggy, no offense, but you sound more and more like an American every day. :)


Don't know if I should laugh or cry.