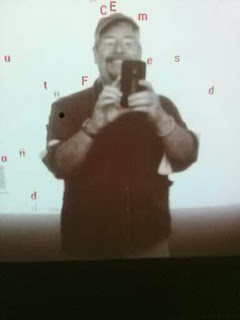 
I will digress at this time and diss on United Airlines for a paragraph and then return to my regularly scheduled blog post. I flew to D.C. on United Airlines basically because it had the only direct flight the travel agent could find. Direct flights at least save you the misery of having to load and unload the airplane twice. Unfortunately the travel agent could only find me a center seat on the flight to D.C. Now sitting in a center seat in Economy on a five hour flight is akin to Dante's third level of hell. So I had to fork out $89 to get a window seat in Economy Plus. A day after I booked the seat, United opened up several seats in regular Economy that would have given me a window or aisle without paying extra. But since I'd already paid for Economy Plus, they wouldn't offer a refund if I switched back to Economy.

I lied, I'm going to diss for two paragraphs.  So the flight is delayed for 40 minutes for no apparent reason. The flight attendants are surly with the slow moving cattle as they boarded. The Economy plus seat I had didn't seem to offer much more leg room. The power outlet at the seat didn't work. There was no inflight entertainment and the flight attendants passed through the cabin once with the beverage cart and then disappeared to god knows where. The return flight to Seattle wasn't much better.

Despite United Airlines, I love to travel. I love staying in hotels. But I hate the fleeting nature of travel. There are often weeks of anticipation. Then the initial euphoria of the first days of being away and then the depression of the inevitable reentry into the real world of work and routine. I simply despise return flights. Especially on United. The four or five hour flight to D.C. turns into a six hour return flight to Seattle, presumably due to winds going back.

But back to the joy of travelling. When I first started travelling on business, I used to stay in my room and order room service. Then I realized how limited (and expensive) it is. Now when I travel, I use Googlemaps to figure out the nearest restaurants, read the reviews and plan my meals. I don't have a problem with going into a restaurant and eating alone. I take my Kindle Fire and stream episodes of whatever I'm binge watching at the time.

Note: Hard Rock Cafes offer universally bad food in a touristy atmosphere. Yet I am still drawn to them for some inexplicable reason. I went to the D.C. Hard Rock (which is located right next to Ford's Theater where Abraham Lincoln was shot...I don't think he ate there before the show though) and was seated in the bar next to the alley door where I could get a good whiff of garbage and what distinctly smelled like vomit every time one of the staff passed through it. On the bright side, I was sitting right under a framed note written by Stevy Nicks to one of the other members of Fleetwood Mac.

D.C. is a particularly cool place to travel. Even with a short amount of time between meetings, there are tons of museums and monuments to explore. And most of them are free. I managed to go to the National Portrait Gallery, the Museum of American History, the Museum of Natural History, the National Art Gallery and ride up the elevator of the Washington Monument. Unfortunately I passed through most of them pretty darned quickly. Fortunately I took lots of photos so I could see what I saw.


Oh well. I've been back a week now and my trip is just a dim memory. Where did the time go?