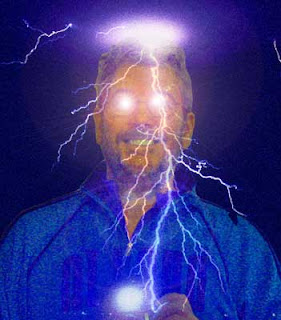 
It is only when you are without electricity that you appreciate all that it does. Although we have gas heat, the furnace and fan that pumps the heat is powered by electricity. The same with the gas fireplace (that won't light anyway due to some glitch with the doo hinky that lights the pilot light). Of course we don't have television without the power. That wouldn't have been a problem if we had our Internet, but the wireless router needs electricity, too.

We couldn't access much in the refrigerator because we wanted to keep as much of the cold in and preserve as much as our food as possible. We weren't as lucky back in August. We had to toss everything. Not that we could cook anything since the microwave needs electricity and the gas stove requires electricity to spark the flame (though I suppose I could chance lighting it with a match and risk blowing up the house). There is always my gas grill on the deck if I truly wanted to cook something.

What really struck me was how extremely dark the city streets were without street or traffic lights. It was kind of like that zombie apocalypse I alluded to in my last post. Yes, the one that I would woefully be unprepared for due to my lack of handyman skills. Though I did prove my resourcefulness by stopping at a local drug store (that hadn't lost its power) and buying $26 worth of batteries in case the camp lantern died. I also made sure I had my power sticks handy to recharge my phone because if that died during the power outage I truly would have been cut off from the world.

In addition to streaming the World War II documentary, the phone was invaluable in that it allowed me to check the power company's Twitter feed to read the helpful information they were posting about how many other households were without power and that power would be restored when they got around to it. I also enjoyed the many customer comments on the power company's Tweets either telling them their power was out (something I am sure the social media manager at the PUD really appreciated) or bitching at them about not being able to control 50 mph winds and trees falling on power lines.

I was kind of on the fence about how I felt about the PUD. Part of me was annoyed that they couldn't come up with a better system for power lines than stringing them all over where trees could fall on them. Wouldn't it make more sense to bury all utility lines underground? I suppose it would be expensive, but repairing power lines every few months after wind storms can't be cheap.

I'd pass on my suggestion but I'm afraid it would get me on a list of homes that would go to the bottom of the list for power restoration in the next power outage. For now I'm just grateful I can go home and watch my streaming Netflix on my big screen television like the good lord intended.

More power to me!