Thrower in the wry 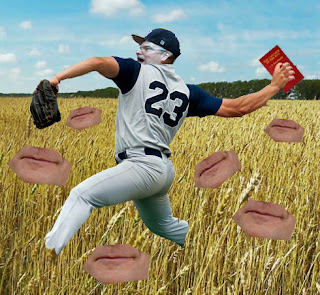 Now granted, it has been more than 40 years since I read Catcher in the Rye. It was required reading when I was in Junior High. Holden Caulfield, the book's main character,  is recognized in the literary world as a symbol of teen angst and rebellion. But I just didn't find him relevant.  I grew up in Boise and Holden Caulfield, the main character was growing up in New York. I can state with great conviction, these are two very different cities.  Coalfield's attended prep school and his family had money. I attended public school, my father was a janitor and my mother worked part time in a grade school lunch room. So you get a sense of where my family was on the money spectrum.


I guess I've always been fascinated with J.D. Salinger more because he was a recluse than for his writing. He basically hid out for the last 50 years of his life. He was another one of the writers who hit a home run in the beginning of his career and than hid in the dugout for the rest of it. An apparently he hid out because so many of his fans tried to seek him out because for whatever reason his words spoke to him. One of those fans was Mark David Chapman, the whack job that killed John Lennon. So there was probably a good reason Salinger was a recluse.

The documentary followed Salinger through his World War II days. He first saw combat on D-Day. And he witnessed the liberation of one of the Jewish concentration camps. Then he checked into a mental hospital in Germany for a few weeks. I can't blame him.

Apparently Salinger met Hemingway (an author in greatly admired) in Europe during the war and asked him to read some of his writing. Hemingway liked it. This I also can't relate to because I'm not a big Hemingway fan either.  Though he did have a cool beard (Hemingway, not Salinger).

After publishing the successful Catcher in the Rye, Salinger apparently became obsessed with obscure religions and belief systems including Kriya Yoga, Christian Science (the one thing he and I had in common), Dianetics (the precursor to Scientology), Edgar Cayce, acupuncture and macrobiotics.

Salinger died of natural causes in 2010 in his New Hampshire home. He was 91.

My main take away from the documentary was that Salinger's typewriter was was a few keys shy of a full alphabet (if you catch my drift...in the wry).