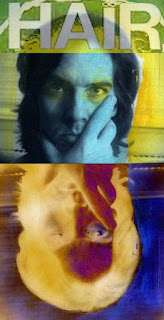 This isn't the first time I've written about hair...well actually my hair. I am in my late 50s and I still have a full head of hair. Albeit, it is silver. I used to pay large sums of money to have my hair cut and styled. But I used the Great Recession as an excuse to stop paying $50 to have it cut and styled and start paying $14 just to have it cut.

For the several years now I have forgone the luxury of high priced salons that offer you coffee while you wait, have separate shampoo stations where they wash your hair (with warm water) and give you a head massage. I traded the modern clean salon for a small barber shop in a strip mall staffed entirely by Vietnamese stylists that seemed to change every time I went in for a haircut. No reservation was ever required. And a shampoo cost extra. Though occasionally, depending upon the stylist, they would give me a head massage.

Not too long ago, my wife pointed out that I have always had nice hair and it was a shame that I was getting consistently bad haircuts since I lowered my standards. So I decided to give a higher priced salon a go of it again. I searched online for local salons and found one in downtown Edmonds that seemed reasonably nice and was close enough to walk to. It had an online scheduling system that I thought was pretty cool, because, being an introvert, the less contact I have to have with people the better. So I scheduled a haircut for last Saturday afternoon.


I received an appointment reminder the day before so I was feeling pretty confident about getting a haircut. I desperately needed one.  About 20 minutes before the appointment I started walking and got there about five minutes before the scheduled time. I was wearing jeans and a Polo shirt. Nothing fancy. Everyone in the salon appeared to be Millennial. I told the receptionist I had a 4:30 p.m. appointment with Ashley (the stylist assigned me by the computer). The receptionist looked at her computer and said she needed to check with the stylist. She came back and told me that they needed to reschedule. Something about an earlier haircut running late.

OK, at the barber shop they would never have thought to turn someone away. Although cheap, they made up for it in the sheer numbers of heads of hair they cut. So I was taken aback that I'd had an actual appointment and was being told I had to come back another day. I went into a state of shock and allowed the receptionist to reschedule me for Thursday night at 6 p.m.

I walked home fuming at having walked all the way to the salon anticipating a reentry into the styled hair world and being turned away. I fumed about it the rest of the evening replaying how I should have demanded someone cut my hair and if no one would, refusing to reschedule unless they offered a discount. They after all indicated on their website that you would be charged if you didn't show up for a hair appointment. So shouldn't I be compensated in some way for them not "showing up" to cut my hair.

So this morning I went online and cancelled the Thursday appointment. Then I wrote an email to the salon manager about my experience and promising them they would never have my business. That will show them (right, like they care about not getting to cut a middle aged man's hair every six weeks). Then I found another downtown salon and made another online appointment for Wednesday at 6 p.m.

OK, none of this is really a big deal, but I can't help but think if I had been a 20-something with a buff body that there would be anyway I'd be dissed at the door of a salon I had an appointment with. No one ever treated me that way at the barber shop.

It reinforces my mindset that I shouldn't bother trying to get a nice haircut at my age because I'm pretty much invisible anyway.

I wonder if they give a discount for cutting invisible hair? I'll let you know after Wednesday's appointment.
Posted by Time at 2:55 PM