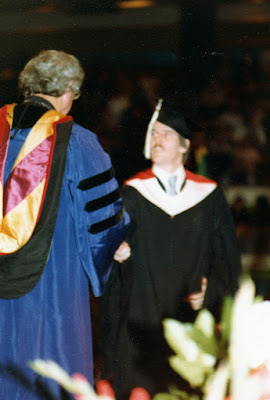 Posting about teaching my children how to start and tend a fire started me thinking about all of the things I learned more by doing then by having someone show me how to do them. I suppose I learned some of them by watching my parents do them. But many things I've done in my life, I had to figure them out by reading books, asking people or just doing.

Of course now there is the Internet and YouTube how to videos up the yin yang (and I'm not referring to the symbol).

Unless you have lots of money to pay other people to do things (which I don't), owning a house forces you to learn lots of things (many the hard way) about maintenance. When I bought my first house it was a VA repo that was structurally fine, but cosmetically beat to hell. I moved in highly enthusiastic about DIY projects.


First thing I did was strip out a bunch of nasty carpet that had been peed upon by a dog the previous owners had kept locked up. Underneath the carpet was this nice hardwood floor that had unfortunately been stained by the urine soaking into it. Rather than do the smart thing and either recarpeting it or hiring someone to refinish the floors, I set about refinishing them myself.

This involved renting a drum sander. Let me tell you that if you have never operated a drum sander, the time to learn how is not when you are refinishing your first hardwood floor. The guy at the rental shop gave me a lot of verbal instructions that I listened to and nodded like a bobble head in a hurricane without actually catching a word he said.

Just let me tell you that refinishing a floor involves going over and over the floor with the drum sander using various different types of sandpaper. The drum sander is about the size of a lawn mower and weighs a ton. And if you aren't careful, the damned thing leaves divots in the floor if you don't control it when the drum makes contact with the floor. It was like holding onto a bucking bull that pulled you across the floor. To make matters worse, you couldn't use it to sand all the way up to the walls. You had to use an edge sander (appropriately named) to reach the edges. And you had to bend over at the waist while holding it which is literally a major pain in the back.

Okay, I learned lots of lessons refinishing that floor. Don't refinish floors in the hottest month of the year. The house was hot as hell and the drum sander would heat it up even more. To make matters worse, the drum sander would kick out this terrible smell when I'd pass over the urine soaked parts of the floor. Nothing like the smell of warm dog piss on a hot August day.

The other lesson I learned about refinishing floors is to test the stain you picked in an inconspicuous place before you start staining the floor. I ended up with this really dark stain that made the rooms seem pretty dark. Ironically it didn't really cover up the urine stained spots that I'd tried using wood bleach on. Oh, but the dark stain really highlighted the divots the drum sander left.

You would think that I learned enough from the refinishing project to avoid similar projects in the rest of the house. But I got it in my head to put quarry tile in the kitchen to replace this god awful linoleum. I muddled my way through that project. Then I made the mistake of painting my entire house by myself.

I tried remodeling my spare bathroom, too. That involved putting in new linoleum, sheet rock and new tile in the shower. I also put in a new sink and toilet. The remodel was only half way successful. The shower tile leaked like a sieve.  Eventually (just before I moved), I had a company called Bathfitters come in and redo both bathrooms.

Another failure was my attempt to install an alarm system. We won't speak of that again.

I guess what sparked this post (besides my post about teaching my children to build a fire) were some of the projects I did at my current house over the last week. In addition to my never ending battles with horse tails, morning glories and other weeds in my wild backyard, I climbed on my roof to use a pole pruner to remove limbs of a cedar tree that was encroaching on the roof. I also spent five hours assembling a new bunk bed for my daughter. Finally I replaced a toilet bowl flap in one of our four bathrooms. Initially I thought I needed to replace most of the guts of the toilet tank. I bought a replacement kit that had me remove the tank from the bowl and try and remove gaskets that had been in the toilet since the beginning of time. That's when I realized I only needed to pop off the old rubber flap (but only after I'd removed the tank from the bowl).

So why all this mundane detail about my forays into home improvement and fixing things? Because it dawned on me that if someone asked me what I was good at, the first thing I'd say is writing. I am a good writer. I am a storyteller. I'd also say I'm a good marketing person. I am a creative person. I'm pretty artistic, too. Then I'd say I'm a decent guitar player.  But these are all things I chose to be. They are talents I've worked at.

I wouldn't say I am a handyman. I can fix some things. I've learned to do these types of things out of necessity, not because I have talent for these things. I am not a mechanical person. I open the hood of my car if it doesn't start and I can only tell you that the engine is still there so I don't know why it isn't working. I don't work on cars. I also don't work on electrical things that could burn my house down (though I have replaced light fixtures).

The thing is that, although I get paid to be a brand strategist and am pretty good at developing advertising, I probably get more satisfaction out of doing the things no one trained me to do like putting together bunk beds and hanging up curtain rods. Because it is easy to do something you are good at. Ask me to write you a clever headline and I'll whip something up in two minutes, but it doesn't give me much satisfaction. But I tell you that after I put together my daughter's bunkbed and looked at how happy she was to have this new bed, I felt like I'd really done something.